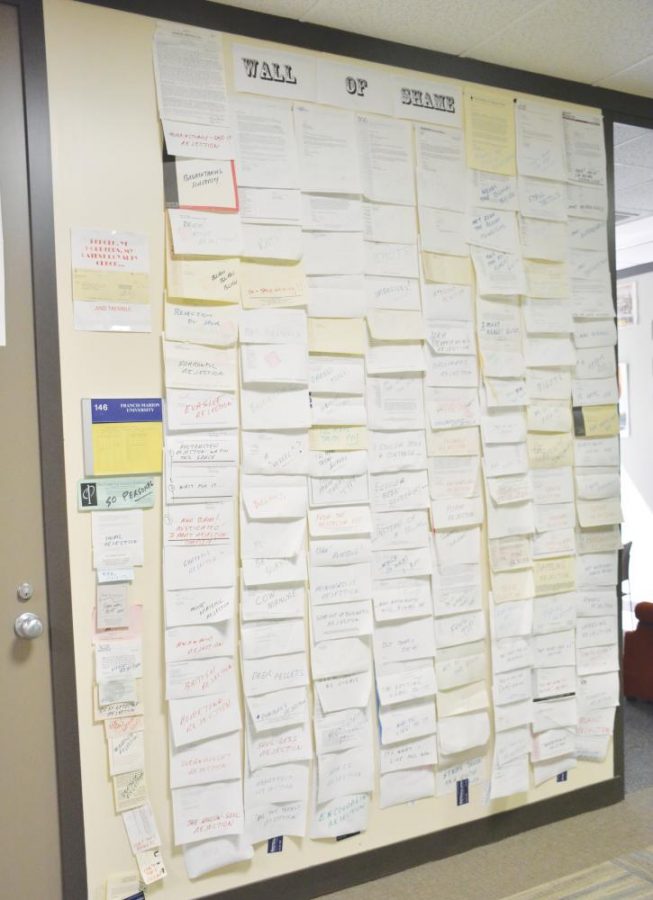 For years, Dr. Jon Tuttle has displayed rejected scripts on the wall beside his office.

For Professor of English and Director of FMU Honors Dr. Jon Tuttle, displaying rejections of his work as a playwright is worth the ridicule to encourage students who are going through rejection themselves.

Tuttle said he has been displaying these rejections outside his office in Founder’s Hall (FH) for longer than he can remember. Tuttle said his display, which is commonly known as the “wall of shame,” has rejection letters dating back to the 1990s, but his rejections began before then.

“I should have started collecting them in the early 80s, but I didn’t think of it then,” Tuttle said. “Imagine how many I’d have. I could make a huge quilt. It would cover campus.”

According to Tuttle, one of the reasons he began the “wall of shame” was because he had no other purpose for all of his rejection letters. He said he hopes the display encourages all FMU students, no matter their interests.

“I was receiving them with great, great regularity,” Tuttle said. “It was mostly a way to demonstrate to students—not just student writers, but any students—that if you want to play baseball, you’re going to strike out, and you’re going to get hit by the pitch. You have to live with that.”

He said he hopes his display helps students prepare for the pain of rejection but encourages them not to give up.

According to Tuttle, he notices people looking at the “wall of shame” at least once a day. He said he has also seen people viewing his rejection letters during tours of the university.

“My feeling is that this may be counter-productive,” Tuttle said. “My favorite moment was when a student stood there looking at it, and Peter Whelan came out to look through it with him. Then, the student asked, ‘Does he ever have anything accepted?’”

Tuttle said he hopes displaying his rejections will help students to reach for their dreams with a practical understanding of what it will take. He said he hopes the “wall of shame” doesn’t hinder them from making the jump into the unknown, though.

According to Tuttle, students occasionally look at the “wall of shame” for an extended period of time before asking him what it is. He said his display isn’t just for the students. Tuttle said it is good for him to display his rejections for himself and to help others understand that, even as a well-established professor, he still goes through rejection.

“I explain that I like to parade my mediocrity,” Tuttle said. “Most students seem to appreciate the intent, and I think take some pity on me. It’s good for students to feel pity for their professors.”

Last year, Tuttle took down his “wall of shame” because the first floor of FH was being painted and updated. He said he thought about leaving it down, but many students asked about it and wanted the “wall of shame” to be put back up.

“I thought, ‘Maybe I’ll just leave it down. Maybe I don’t need to remind people that I suck,’” Tuttle said. “A surprising number of people asked about it, so I put it back up.”

According to Tuttle, rejections shouldn’t always be taken personally because they do not always relate to the person’s ability to write.

“Student writers have to get right with rejection, period, and with the fact that the rejection may have nothing to do with the quality of their work,” Tuttle said.  “One play of mine, ‘Holy Ghost,’ gets rejected a lot because it calls for a cast that is 90 percent male, and that doesn’t describe very many theatre companies. Or maybe it’s terrible. I prefer to believe the former.”