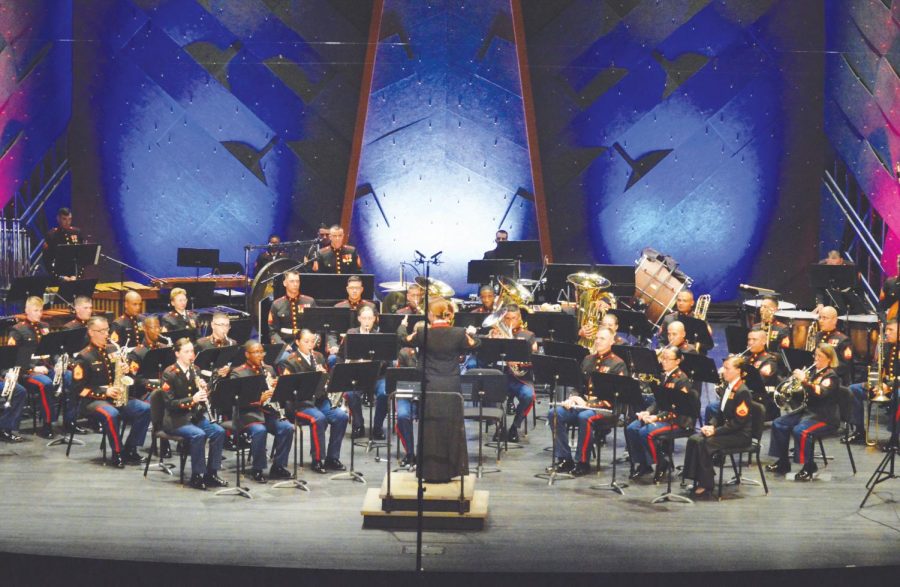 The Paris Island Marine Band performs at the FMU Performing Arts Center. The band honors military veterans through their music.

The performance was split between three conductors. Between pieces, Gunnery Sgt. Kristine Shaw provided context for each piece.

Warrant Officer Katherine Genovese began the performance by conducting the “Star Spangled Banner” by John Stafford Smith. Audience members stood and sang the words along as the band played.

Genovese closed her section with “The Wind Racers” by Jeremy Bell. Bell’s composition was influenced by video game and movie scores, according to Shaw. Shaw said the piece aims to leave audience’s clutching their seats in excitement. Genovese said “The Wind Racers” was her favorite piece to conduct.

“We get to pick the pieces that we love, so that’s the best part of the job,” Genovese said.

Shaw conducted the band through two pieces: “Nobles of the Mystic Shrine” by John Philip Sousa and “Shenandoah” by Frank Ticheli. Sousa served in the Marines and is considered the most famous Marine musician, according to Shaw.

“Shenandoah” was written in honor of the river that runs through the Shenandoah Valley, according to Shaw. Shaw said the folk piece invites audience members to contemplate the majesty of the landscape of the U.S.

“Honestly, it’s just as emotional a piece to perform as it is to hear,” Shaw said.

Master Sgt. Daniel Sullivan led the final section of the performance, and this event was Sullivan’s last performance before retirement. Sullivan served in the Marine Corps for over 20 years as a flute instructor, enlisted conductor, bandmaster and many other roles. According to Shaw, Sullivan left an indelible mark on the Marine Band program.

Sullivan conducted seven pieces for the performance. While performing “Armed Forces ‘72” by Thomas Knox, the band honored audience members who served in the U.S. military. While Sullivan conducted the band, Shaw called out names for the different branches U.S. military. When their branch was called, veterans and current service members stood to receive cheers and applause from the audience.

Retired Senior Master Sgts. Sam Tuberville and James Ward said it felt great to be honored by the band.

“It just brings back those memories. There’s nothing like being part of the armed forces,” Ward said.

Sullivan closed the night with “Marines Hymn” composed by L.Z. Phillips and arranged by Sammy Nestico. Sullivan turned to the audience during the performance and directed them to clap along throughout the piece.

All members of the Marine Band are active duty Marines, Shaw said. Before going through basic training, potential band members have auditions, according to Shaw.

Staff Sgt. Richard Anderson said performing for the community changes some people’s perspectives on the Marines. According to Anderson, many people do not realize the Marines have a wide-spread musical program.