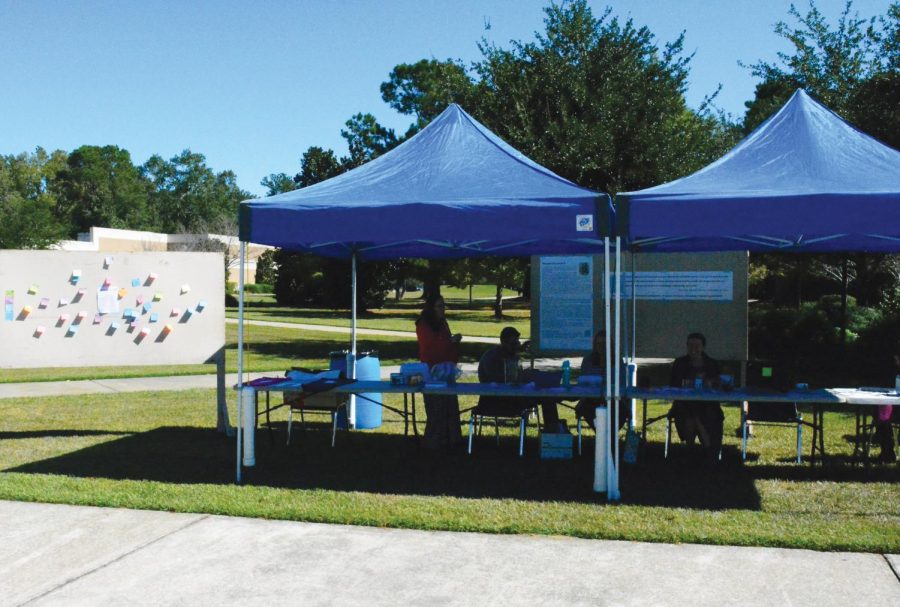 FMU Women in STEM sponsor Ada Lovelace Day for students to honor people who inspire them.

The FMU Women in Science, Technology, Engineering and Mathematics (STEM) sponsored Ada Lovelace Day on the Founders Hall lawn to celebrate the women who have come before them in the STEM fields.

According to Dr. Lorianne Turner, associate professor of biology, the event was held on Oct. 18 to coincide with the English Film Series. The series partnered with Women in STEM and the Gender Studies program to show “Hidden Figures” later in the day.

There was a variety of activities throughout Ada Lovelace Day, including a scavenger hunt and a board on which students could hang Post-it notes with comments about people who inspired them.

“We had a tent on the lawn, and different female professors from the STEM fields were manning the tent throughout the day just to get our faces out there and meet people,” Turner said.

Turner said they wanted to share information about many women in STEM fields.

“We had these cards that we posted on campus, and on the front side we had information about women in STEM fields,” Turner said. “We had a laptop computer and camera with a template for the cards for people to make their own.”

There was also a board next to the tent for students to post about people who inspired them, regardless of gender.

According to Turner, FMU has held similar events for the last five years.

“This was our sixth year of planning the event,” Turner said. “Our event last year was cancelled because of the hurricane.”

Turner said the event was named after Ada Lovelace, who was one of the first women to advance in the STEM field, and worked with Charles Babbage to develop an analytical engine, a precursor to the modern computer.

Lovelace paved the way for women in fields of science, Turner said.

“Lovelace was a representative figure of early women in science,” Turner said.

The goal of the event was to use figures such as Lovelace to show women that they can participate in careers in the STEM fields.

“The idea is to promote recognition and understanding of the contributions women have made in STEM fields throughout history to identify role models for women who want to pursue careers or interests in STEM fields,” Turner said.

According to Turner, the event originated in England and is held around the world, normally on the second Tuesday of October.

“The point of the event is to promote worldwide participation and bring awareness about women in STEM fields,” Turner said.

Turner said several academic departments had a hand in hosting the event, including biology, psychology, mathematics and physics.