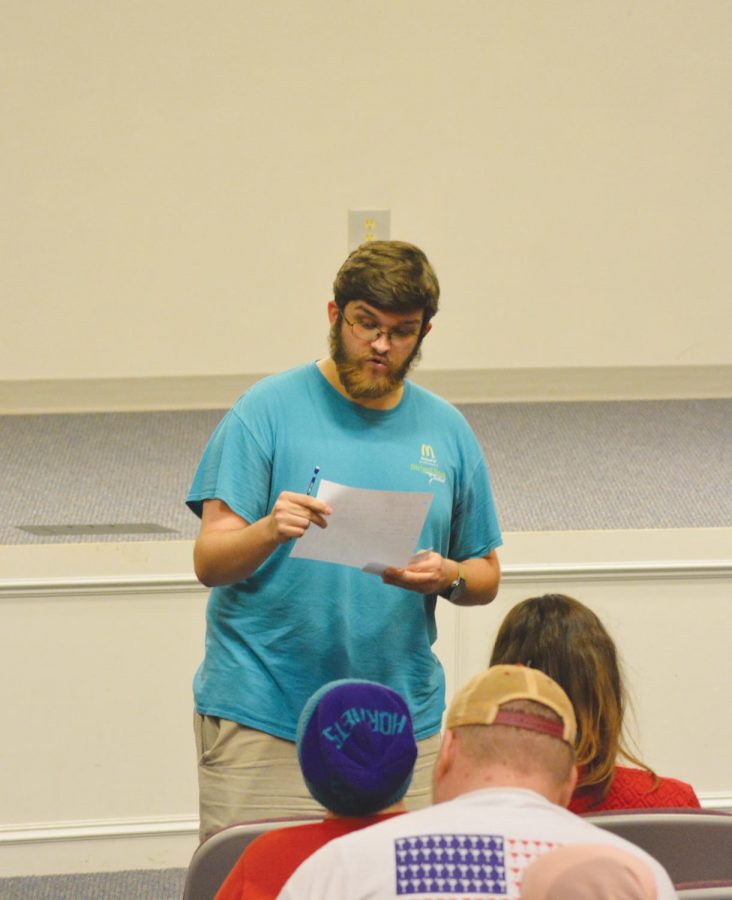 The poetry slam took place on Oct. 24 in Lowrimore Auditorium.

With more than 12 readers and an audience of approximately 50 people, Jackie Wilcox, one of the poetry editors for the “Snow Island Review,” said this was the largest fall semester poetry slam that “Snow Island Review” has hosted since she has been at FMU.

“Snow Island Review” holds a poetry slam each semester. Spring semester competitions are typically larger than the competitions in the fall semester. Wilcox said she hopes these numbers will translate into an even larger spring competition.

Six students read their original compositions to compete for two awards: an overall winner and a “People’s Choice” winner. Four judges, including three “Snow Island Review” members and one audience member, selected an overall winner. Audience members had a hand in voting for a “People’s Choice” winner. “Snow Island Review” editors awarded winners with publication in this year’s magazine.

MaKayla O’Neal won the overall award with her poem “The Evolution of the Heart.” O’Neal said the poem was inspired by changes in her perspective on love.

“I grew up watching my parents have a lot of struggles,” O’Neal said. “It was basically about how I looked at love when I was little to now growing up and going through some of the same struggles that they went through.”

O’Neal said she has been writing poetry since she was a child, but “The Evolution of the Heart” was the first poem she ever finished. This competition was also O’Neal’s first time performing. O’Neal said she wanted to compete so she could connect with people and find inspiration, she said.

Kristen Woodard won the “People’s Choice” and was runner up in the judges’ selection. Her poem “Dear Love” was about her experiences of falling in love, Woodard said. According to Woodard, the competition was a way for her to share her poetry with other people.

In addition to being a poetry editor, Wilcox was one of four judges in the competition. According to Wilcox, judges selected the winners based on wordplay and delivery.

“You can have a fantastic poem, but if you don’t deliver it with the emotion it requires, then it can fall flat,” Wilcox said. “That doesn’t immediately disqualify someone from winning.”

After the judges announced the winners, the stage opened for a free reading session. During this time, people could read their own poetry or other poems for the audience.

Professor of English Dr. Jo Angela Edwins read two poems she wrote about life as a woman in America. One of her poem’s, “This Year,” won second place in the Poetry Superhighway Annual Poetry Contest in 2016. “This Year” listed four incidents of crimes and derogatory actions against women in the Florence area.

Dakota Goff read in the competitive portion and the free reading session. Goff said his first poem, “Tough Guy,” was written after he had an emotional breakdown. Goff said poetry allows him to express his feelings in a way that prose writing cannot.

“It kind of just flowed,” Goff said. “My computer was right in front of me, and it just happened.”