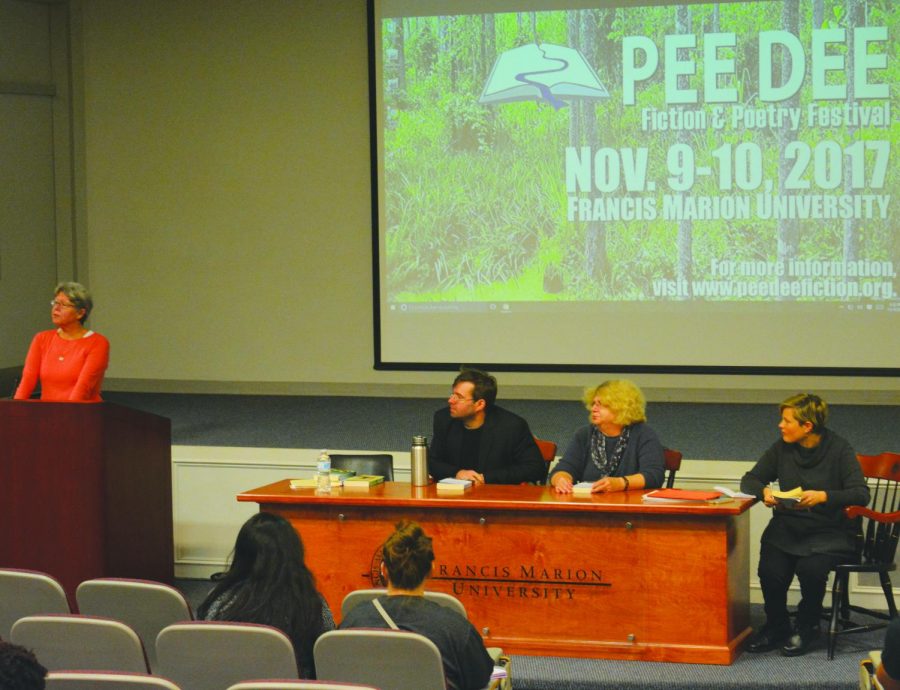 English professors participate in a panel during the 12th annual Pee Dee Fiction and Poetry Festival.

Each year, FMU hosts the annual Pee Dee Fiction and Poetry Festival (PDFPF) to celebrate writers and their accomplishments and to inspire students on their writing journeys.

During the first full week of November, the FMU Department of English invited several poets and fiction writers to spend two days at FMU. They discussed their works and writing processes and gave insight to students and professors about being a professional writer.

The 12th annual PDFPF took place on Nov. 9-10, and the featured writers at the festival were poets Greg Pardlo and Ross Gay and fiction writers Dan Chaon and Jennifer Haigh. Due to an unexpected illness, Haigh was unable to travel to FMU. Dr. Landon Houle, assistant professor of English and faculty advisor for the “Snow Island Review,” stepped in to take Haigh’s place. Aside from her responsibilities at FMU, Houle is a fiction writer.

According to Dr. Rebecca Flannagan, chair of the Department of English, Modern Languages and Philosophy, Houle was a perfect substitute for Haigh.

Flannagan is also in charge of the PDFPF Committee in the English department and has been serving as chair of this committee for the last six years. With the help of the rest of the committee members, especially Houle and Professor of English Jo Angela Edwins, Flannagan coordinated and planned the event.

Flannagan said the PDFPF takes months of preparation; planning for the upcoming festival usually begins only weeks after the most recent festival.

“We basically try to start choosing the writers by looking at texts we think students would enjoy reading,” Flannagan said. “We have to start thinking about that pretty early on, and once we choose a few texts that we think will be successful, we get to start narrowing down the list of writers, contacting their agents, negotiating prices and making plans.”

Many freshman composition students read a common text, meaning that several different professors teach the same text. Typically, the author of the common text is invited to be a part of the festival.

This year, one of the common texts was “You Remind Me of Me,” written by Chaon. Flannagan said one of her favorite parts of the festival was getting to see how freshman students reacted to seeing the author of the text.

“These students have spent a lot of time studying and thinking about this person’s work,” Flannagan said. “When they get to see the author in front of them and get to see that this is an actual person who is talking to them and answering their questions, students are kind of in awe and a little star-struck. It’s exciting for me to see how much more they appreciate the text after listening to the ways the author speaks about it.”

The writers spend Thursday and Friday on campus as part of the festival, but the event begins Wednesday night for the writers. Flannagan said the writers and several English faculty members have dinner at Victor’s Bistro in Florence the night before the event begins to let the writers get to know FMU faculty and build a community with each other.

Thursday morning, the event began with two panel sessions. The first was comprised of Houle and Gay. Chaon and Pardlo were in the second panel. During the sessions, the writers read excerpts from their works and answered questions from the audience.

That afternoon, Chaon held a discussion of his novel “You Remind Me of Me,” which, according to Flannagan, attracted the attention of many freshman composition students. That night, Houle and Pardlo held separate readings, which were followed by a book signing and a reception held at The Cottage. Students were welcome at this reception, and attendees were served dinner and light refreshments and were encouraged to mingle and talk with the writers about their work.

At one of the panel discussions, Houle and Chaon discussed several reasons why they write and explained their writing processes.

“For me, writing is really all about connection,” Houle said. “I like to write and form characters to better connect with and understand people. Usually, though, since a lot of my work is non-fiction, I end up getting to understand myself.”

At the second panel session on Friday, Gay shared a short, humorous essay titled “An Abundance of Public Toilets.”

Flannagan said the planning for next year’s festival will begin soon, but she will no longer be in charge of planning the event. Next year, according to Flannagan, Edwins and Houle will take over the committee and will be planning the festival.

“This is my last year as chair of the committee,” Flannagan said. “Edwins and Houle have been helping me and will do the majority of the planning for next year’s festival. I’m excited to see where they’ll take the festival; I know they’ll do a great job.