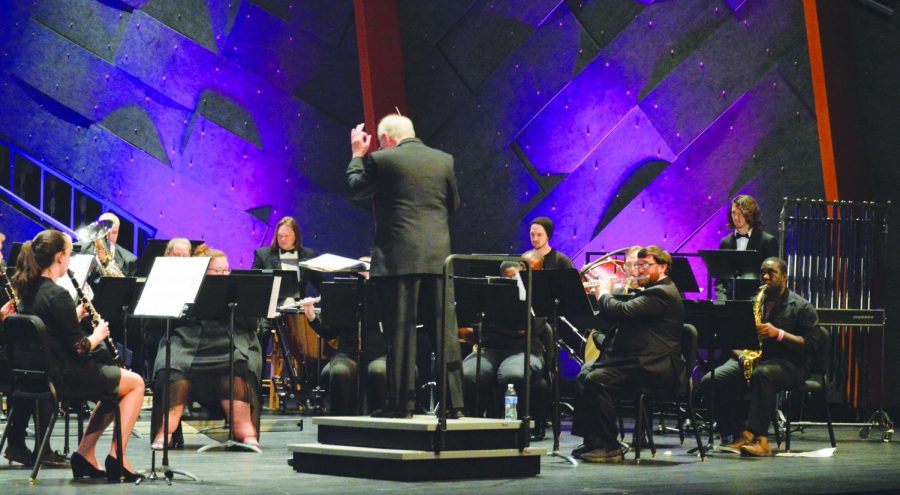 Comprised of students, alumni and members of the community, the FMU Concert Band performed Halloween-themed music at the Performing Art Center on Halloween night.

The band performed “Marche Diabolique” by Brian Balmages. The piece features sounds similar to those used in horror movie scenes. The band’s conductor, Dr. Terry Roberts, said the main interval of “Marche Diabolique” featured tri-tones that are used to project fear in films.

The band played excerpts from “The Complete Harry Potter,” a compilation of music from the “Harry Potter” movies arranged by Jerry Brubaker. Roberts said the band’s piece was the incomplete version.

“I made some cuts, but it’s as much of ‘Harry Potter’ as you’re ever going to hear at one time,” Roberts said.

“Back then in the 19th century in France, the drug of choice was opium, and all the high-society people smoked opium,” Roberts said.

“March of the Scaffold,” a piece performed, is about a dream Berlioz had of killing someone and being sent to the guillotine, according to Roberts.

“He sort of thinks about his life, and then right at the end, before the guillotine drops, you hear the bump and the rolling head,” Roberts said.

In the movement “A Witches’ Sabbath,” chimes signaled a death toll and the tubas played a chant of death, according to Roberts. Several members of the band said they particularly enjoyed this piece.

The band also played “Trauersinfonie” by Richard Wagner. “Trauersinfonie” was written in homage to Carl Maria von Weber and was originally played as Weber’s ashes were transported from London, England, to Dresden, Germany.

According to Roberts, Weber is considered the father of classical Romantic German opera. Wagner composed the piece as a compilation of some of Weber’s pieces, Roberts said.

Roberts said some band members come from as far away as Lake City S.C. For some, the band is a way for people out of school to keep in touch with their instruments, Roberts said.

Kenyun Peterson, a 2014 FMU graduate, said under the direction of Roberts, the band was able to perform on another level. Peterson said he started playing saxophone in the band shortly after transferring to FMU and continued to play after graduation.

Tyler Cook teaches music and history at Trinity-Byrnes Collegiate Prep School. Cook said he played with the band as a substitute. This was Cook’s first time performing with Roberts.

“The music is challenging, but anybody with a few years of experience playing in a band program could come in,” Cook said, “Really anybody who loves music, can play and can reasonably count is going to be alright.”

Several performers said they are also involved in the other community bands in Florence.

FMU percussion instructor Shane Reeves said he plays with Roberts in the Florence Symphony Orchestra as well as the concert band.

“It’s a small world,” Roberts said. “We all know each other. We all help each other and get gigs for each other.”

“It’s nice to be able to play with people my own age,” Hyman said.