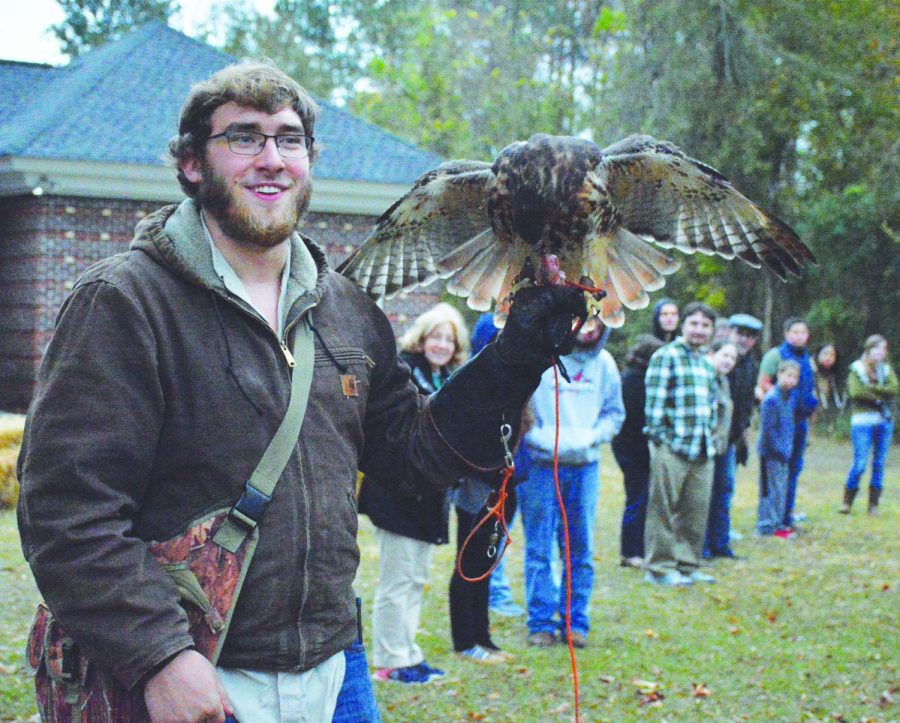 The Pre-Vet Club hosts an exhibit with FMU student Tyler Wright. Wright works in raptor conservation in his free time.

The FMU Pre-Vet Club hosted a raptor demonstration with Tyler Wright, a licensed falconer, to educate students and community members on how to care for raptors and inform the public about common myths.

Falconry is the practice of training raptors, such as hawks, eagles, falcons and owls, to hunt in their natural habitats, Wright said. He also said people hunted with birds before bows were invented.

During the presentation, Talon would fly back and forth between a tree and his glove. Wright said Talon has learned to associate the glove and whistling with being fed.

According to Wright, Talon only returns to the glove because he associates it with food. Red-Tailed Hawks such as Talon do not form bonds with their owners, Wright said. Wright said Talon simply sees him as a food source.

“I could have him for 20 years, and if I died in the woods, he’d eat my eyeballs out,” Wright said.

Wright said if Talon were to eat a squirrel during a hunt, he might not want to return to the glove. In these cases, a leather lure with a piece of meat attached is swung while Wright whistles and Talon comes back. Talon has learned to associate the lure with a bigger meal, according to Wright.

Wright demonstrated the lure by having audience members for a tunnel. Wright and Talon stood on opposite ends of the tunnel. When Wright whistled, Talon flew between the audience members to Wright. Wright gave Talon a piece of skinned squirrel meat for coming to the lure.

Wright said one goal of the exhibition was to inform people of common misconceptions they have about hawks. Wright said many people attempt to kill hawks because they fear the hawks will attack their pets. Typically, hawks hunt smaller prey, Wright said. The amount of energy a hawk would spend hunting larger prey such as cats or dogs would not be worth the energy received from eating them, Wright said.

Wright said he also wanted people to understand that raptors are not meant to be kept as pets. A raptor’s weight, for example, has to be carefully monitored, according to Wright. When temperatures are low, missing one meal could kill a raptor.

Wright said he has been doing falconry exhibitions since he got his license at 14 years old.

Wright said those who are interested in falconry should be aware of the time commitment. Wright said most of his free time is dedicated to caring for Talon rather than socializing.

“It’s my responsibility to get him out to hunt as much as possible for it to be fair to have him in the first place,” Wright said.

Despite the time commitment, Wright said being able to take part in raptor conservation is amazing.

Wright said falconry creates a safety net for raptors. Because of veterinary care, captive raptors can make mistakes that would be fatal in the wild and be able to recover from them. This process allows the raptors to hunt and creates a healthier population when the raptors are released, according to Wright.