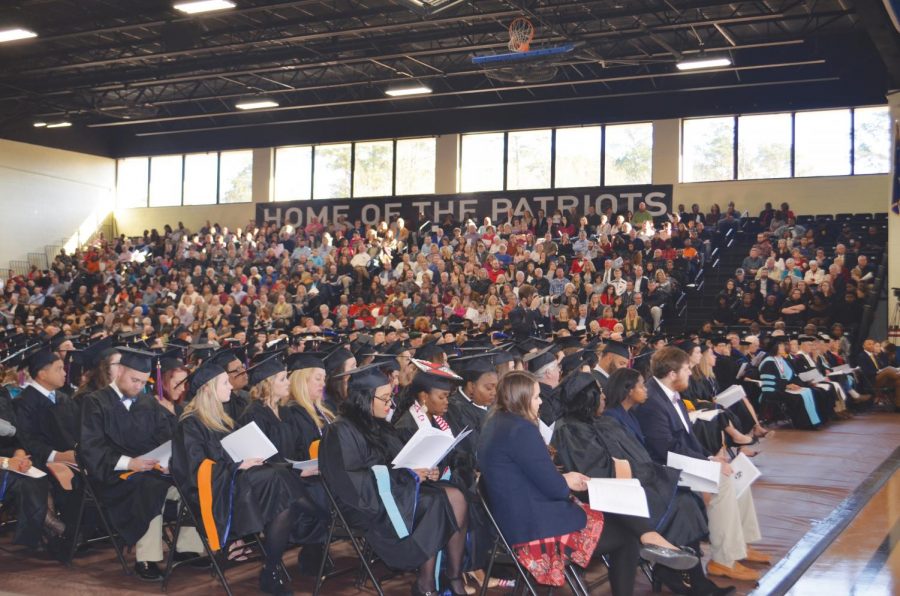 With an in-state student graduation rate of 96 percent, 297 students, this class had a higher rate than in past graduations. This year, 32 graduated with honors, three of which also graduated with university honors.

Judge Buckhannon, a native of Darlington, S.C., graduated from FMU in 1991 where she received her Bachelor of Science degree. Her main area of practice has been in the family court system upon her graduation from the University of South Carolina School of Law in 1994. Buckhannon also served on the Board of Trustees for her Alma Mater from 1998 until 2003.

Ghartey-Tagoe, the commencement speaker for this semester’s ceremony, is a native of Ghana who came to the United States when he was 19 years old. Throughout his years in school, he faced many trials before getting where he is today.

Young Ghartey-Tagoe faced his first major obstacle in life when he was held back in the second grade. This was his first personal disappointment, but he learned from it and moved on with his life.

Years later in 1985, he faced another obstacle when he was waitlisted by Duke University School of Law. Once he got into the program and changed his mindset, he grew into a better student every year and graduated with a job offer in Washington, D.C.

Nearly two decades later, he joined Duke Energy as Chief Regulatory Council in North Carolina and now serves as the State President of the company in South Carolina.

He told these two stories, among others, to the graduating class to show that by learning something from the hardships life hands you and persevering, you can achieve anything.

Among the 309 students that received their diplomas, psychology graduate Anne-Marie Norwood has faced adversities of her own.

Norwood was born and raised in Florence and is a graduate of West Florence High School. Although most of her high school friends went to colleges outside of Florence, she decided to stay in Florence.

“I’ve always loved being a part of a small town growing up,” Norwood said. “I’m big on staying true to my roots, so I guess that’s why I’m such a homebody because this town is a part of who I am. FMU is where my mom graduated from and it is the best feeling knowing I completed something so big.”

On June 9, 2016, she and her best friend were involved in a fatal head-on collision. The accident changed her outlook on both life and her education.

“After three surgeries, a week in the hospital and one year of physical therapy, I realized that life is too short to just settle for what’s easy,” Norwood said. Throughout her recovery process, doctors noticed that her ACL was torn, causing another surgery and three months on crutches.

After her wreck, Norwood realized that the career path she was taking was not the one her heart was set on. Even though it would put her a semester behind, she changed her major from early childhood education and never looked back.

In her final semester academic internship class, she became an intern at McLeod Hospital Case Management with social work. Immediately, she knew she was in the right place.

“It was hard seeing all of my friends graduating on time and knowing that I was still in school, but I knew that it would be worth it,” Norwood said. “It’s not about doing things on my time, but on God’s time.”

While both Ghartey-Tagoe and Norwood faced different trials, they both took positive life lessons from them and hope to inspire others with their stories. Ghartey-Tagoe told graduates to always thank those who supported you throughout the good and bad times because their support is what has helped them move forward successfully.