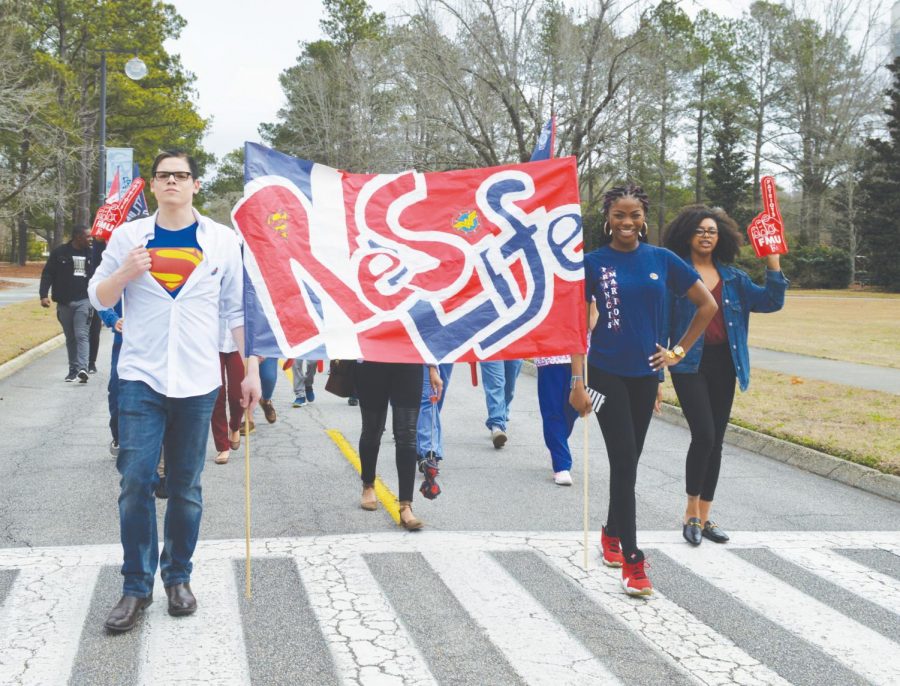 The FMU Homecoming Committee, along with faculty, decided to make a few changes to this year’s Homecoming parade to make the experience more memorable for participating students and alumni.

Every year, student organizations gather behind the dorms and apartments to decorate their golf carts to prepare for the traditional parade route that is followed for Homecoming. This year, the Homecoming committee decided it would be a good idea to test a new route. Rather than starting in the usual spot and walking through the Village Apartments, organizations gathered behind the Grille to begin the parade.

The new route led students from their new starting location, to the Stokes Administration Building and down Alumni Drive to the Smith University Center (UC). Students, alumni and faculty gathered along the parade route to watch participating organizations show their school spirit.

Kylie Cracknell, homecoming committee member, said she prefers the old route compared to the new one because it allowed on-campus students living in the residence halls and Village Apartments to be more involved with the parade. However, she said she likes the fact the university is willing to try new things to make the Homecoming weekend experience more exciting.

Another change in the Homecoming parade this year was the use of vehicles in the parade, rather than only golf carts and foot traffic.

“I am very happy because we worked so hard to transition from a golf cart parade to a car and float parade,” said Freddricka Presley, former SGA president. “I’m happy to see such a good turnout and everyone having a good time.”

FMU Alumnus and Senior Admissions Counselor Cody Simpson said he was also pleased with the turnout of alumni for tailgating and how well the parade went.

“It is really amazing to see the cars added this year, I hope that is here to stay,” Simpson said. “The theme, homecoming heroes, was represented very well and it was neat. I have seen more children today than I’ve seen in a long time, which really serves the purpose as to why we are here as patriots and bringing on our future generations.”

Zeta Tau Alpha Fraternity member Kaitlyn Holley said this was her third and favorite Homecoming parade since she became a student at FMU.

“I liked getting dressed up as superheroes and chanting with my sisters,” Holley said. “This year was my favorite because we went all out with our costumes and golf cart. We had a lot of fun preparing for Homecoming.”