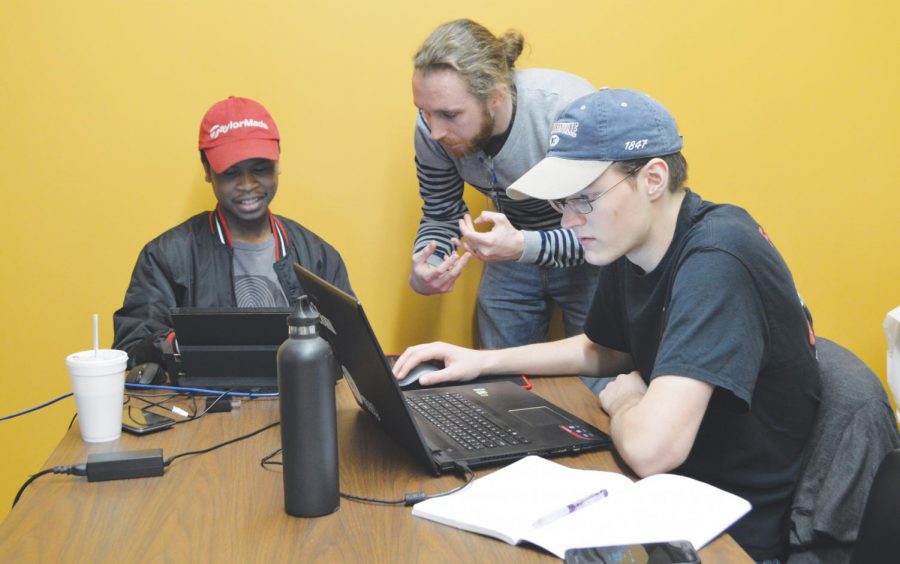 FMU students James McCarley and Laurence Martin work with programmer Bryant Ward on the “Whose Lips” game at the Kelley Center for Enterprise and Innovation.

Some FMU Computer Science students are developing a game with the help of local programmers at the Kelley Center for Enterprise and Innovation in downtown Florence.

Executive Director of the Kelley Center Brianna Dennis, who has been involved in small-business development for 12 years, said she has been interested in finding a way to create a community outside of the classroom for the computer science students for over a year.

Dennis met Bryant Ward and David Birt, two local programmers in the area who also had a similar vision for developing a community of programmers.

“We talked about how students need somewhere other than the classroom to experience coding,” Dennis said. “There are so many different languages and avenues with computer science, so having mentoring and simulating a real work environment for students is important. It gives them real experience that they can take with them to future employers. The goal of this was to give them an outlet.”

Dennis said after students complete this semester’s project, they will begin work on a new project, all with the guidance and assistance of Ward and Birt.

Ward and Birt, both web developers at Synergy Partners, said their biggest hope for the computer science students and their current project is that they gain the ability to express themselves through coding.

“Code in and of itself is an art form,” Bert said. “We are writers. You can sit down and read certain people’s code and you can almost tell how they think. It’s a really good form of expression and it’s also very rewarding because you’re continuously solving problems. I want to see them grow confident in their own writing of code.”

Ward also said one of the things he wants to see resonate with the students is a sense that they can be successful in the field.

“I want the students to have the confidence they need going into a job interview,” Ward said.

Birt and Ward led the discussion while the students worked on building a website for the game they are developing.

Ward said the idea for the game the students are developing came from a past FMU intern. The game, ‘Whose Lips’ involves an image of a celebrity’s mouth, and the player must guess whose lips they are.

Birt also said the idea of the game translated very easily into the technology that they work with, so it only made sense to present it to the students to work on as a prototype.

Ryan Blum, an FMU student, said after receiving a degree in physics and having a career in that field, he noticed an abundance of jobs in software and decided to return to FMU for a second degree in computer science.

Blum also said working outside of the classroom in a more realistic environment was extremely crucial when learning.

“If I’m going to be going into this field, I need to know what is expected of me in the day to day things,” Blum said. “Working with seasoned software engineers in this type of atmosphere is a great opportunity that I know will prepare me for that.”