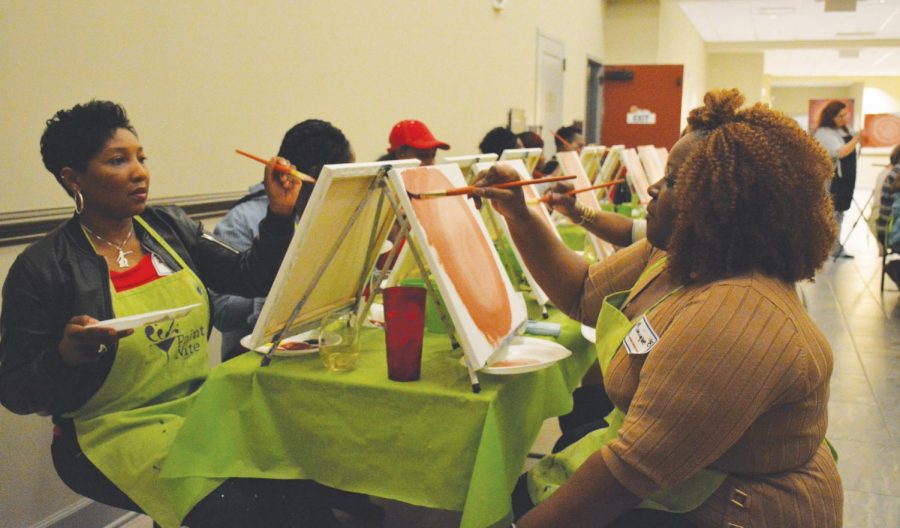 MU almuni paint and socialize at Local Motive Brewing Co. as a part of the Homecoming festivities.

To celebrate the 2018 Homecoming Week, various FMU departments and organizations sponsored a variety of events for students and alumni to boost school spirit.

On Monday, Feb. 5, the University Programming Board hosted a game show style event where students competed against each other for a spot in the final round to win a cash prize.

After winning against his peers at doing the Macarena, catching his shoes on a plate and popping balloons, Jameson Montgomery won the $80 prize at the end of the event.

On Wednesday, Feb. 7, students gathered in the Smith University Center gym to watch their peers participate in The Patriot Experience. The FMU Student Government Association (SGA) hosted the pep rally.

Kylie Cracknell, an SGA Senator, said SGA hosted the event to get students pumped up about Homecoming and to get them involved with other Homecoming festivities.

Assistant Dean of students Daphne Carter-McCants and Student Life Specialist and Student Ombudsman Michael Barfield announced the Homecoming Court, FMU cheerleaders performed and students won prizes from a raffle. There were 3-point shooting and dunking contests in which students and faculty could compete.

“I went to watch the 3-point shootout and listen to my friend DJ,” said Shari Tingle, senior theatre arts major at FMU. “It was a pretty cool event. I got a foam finger, which was exciting.”

While the vast majority of the week’s events were geared toward current students, the alumni were invited to Local Motive Brewing Co. for a paint and mingle event on Friday, Feb. 9.

The FMU Alumni Association partnered with Local Motive Brewing Co. to give FMU alumni an opportunity to mingle with former classmates, enjoy food and drinks and listen to live music. The ticketed event costed $10 for the social and $30 for the painting class.

According to Director of Alumni Affairs Lee Daugherty, tickets for the paint group at Local Motive sold out within a day and a half, so they partnered with Soulé Cafe, allowing 20 more alumni to participate in the event.

Daugherty said prior to the event, the alumni association sold 85 tickets, and during the night of the event 40 more people bought tickets at the door. In total, 130 alumni attended the event.

Allison Thompson, FMU alumna and former softball player, said she enjoyed seeing some of her old classmates at the event hosted at her husband’s business. Thompson, a native of Pennsylvania, said one of her favorite things as a student athlete was how close everything is on campus. She said compared to larger universities, it was nice to be able to walk to practice from class and have classes within a close proximity.

Daugherty said this year’s tailgating experience brought more alumni compared to recent years, bringing in around 1,000 more people than last year. He said alumni association has worked hard to ensure the alumni come to homecoming and enjoy their time catching up with old friends.

“I’m pleased to see that just about every fraternity and sorority, even ones who aren’t on campus anymore that are true heritage chapters, showed up,” Daugherty said. “It’s been a fantastic event.”

After the men’s basketball game against University of North Georgia, which ended in a win for FMU, this year’s homecoming king and queen were announced. Derek Martin and Brittany Greene won Homecoming King and Queen respectively. Voting for Homecoming took place on Feb. 6-7 in the UC.