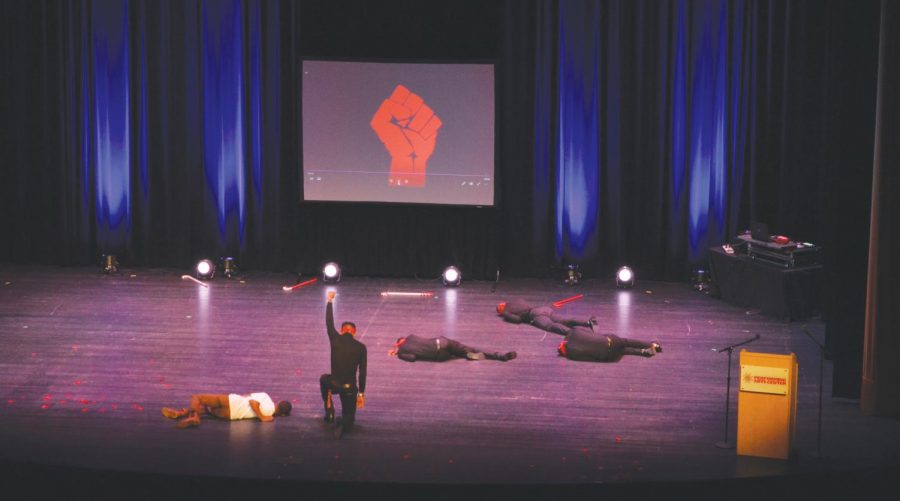 The event took place at FMU’s Performing Arts Center (PAC) on Friday, Feb. 10 and had six participating sororities and fraternities.

LaTasha Brand, assistant dean of students, said the organizations have been working toward the show since early September.

“The step show really provides these organizations with a sense of teamwork,” Brand said. “The memories they make during practices and performances are ones they will not forget. Also, when these organizations get to perform in front of others, it could potentially encourage other students to get involved with NPHC. Overall, the event is just important to the growth of the organizations.”

The panel of judges consisted of advisors and alumni of NPHC sororities and fraternities.

According to Brand, each organization was allowed to nominate one judge and the step show winner received a cash price and trophy.

Elijah Moton III, a member of Alpha Phi Alpha, said there are hours of work that go into preparing for a step show.

“Stepping came from our ancestors and our roots,” Moton said. “As a black Greek-letter organization, we have really built off of that. It’s been diversified over time. We come up with different beats and put them to songs or either chair steps. We come up with our intro, and it goes from there. You need to think about what’s going to make your show pop to the judges. All of these things take time. Before the performance we were practicing three times a week, then the two weeks leading up to the show we practiced every day.”

Moton also said regardless of the challenges of stepping, such as overcoming nerves before a performance or staying on beat with the group, the reward of overcoming and building something as a community with his brothers is worth all of the hours of preparation.

“The practices allow us to break down barriers between one another,” Moton said. “If you want your show to be good, you have to be able to be honest with someone if they need to step it up or improve. Putting the step show first is something we do because we want to win. Everyone wants to win the step show because you want bragging rights on campus.”

Melriska McRae, a member of Kappa Alpha Kappa Sorority Inc., said having a group of girls that you can count on translates into the performance.

“Its about the sisterhood,” McRae said. “Having that person who  uplifts you and encourages you creates a bond. You see that on stage.”

McRae said stepping is about being in one accord.

“Everyone’s hands, arms, feet and legs have to be on the same page,” McRae said. “That’s alot to be concentrating on while also remembering the choreography.”

“Man, we were really trying to just keep our balance through the whole thing,” McRae said. “That was the most difficult part of all.”