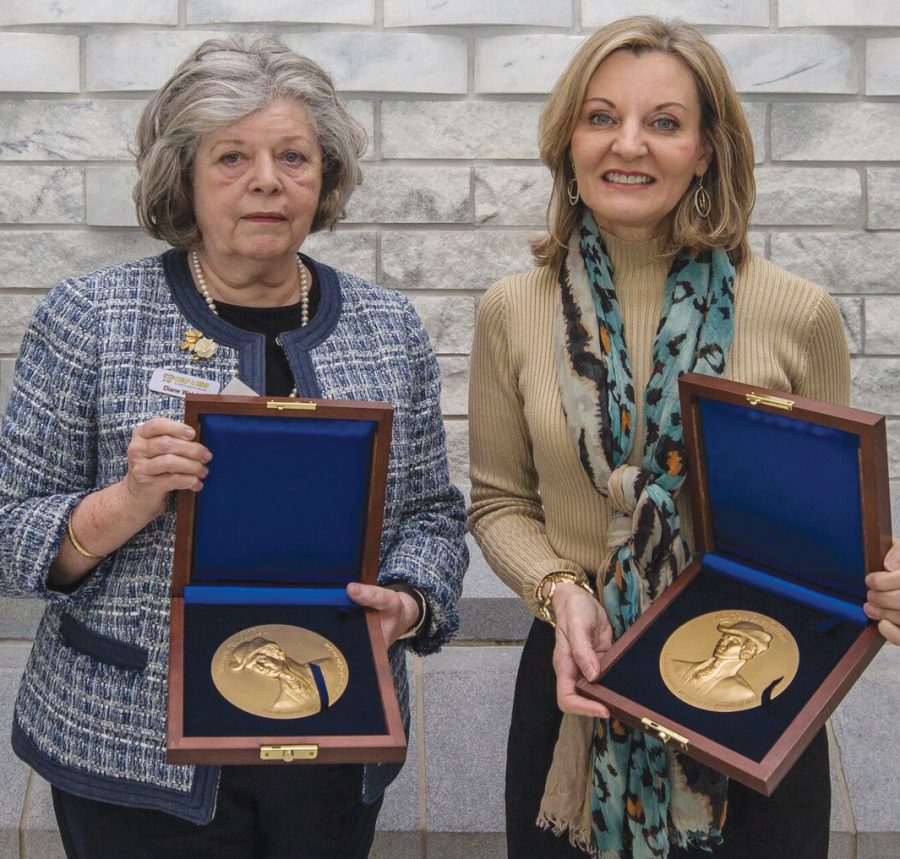 Dianne Welsh and Pennie Burns, on behalf of their father Wilbur Owens, receive the 2018 Marion Medallions.

FMU and “The Morning News” awarded two members of the Pee Dee region with the Marion Medallion at the FMU Performing Arts Center on Feb. 27.

Wilbur Owens “Billy” Powers and Help 4 Kids were chosen as the recipients for this year’s Marion Medallion awards due to their extraordinary and outstanding service to the Pee Dee region, said FMU President Fred Carter.

According to Carter, there are many things that set this six-year-old award apart from other’s in the Pee Dee. Recipients of the award cannot be nominated or voted for, Carter said.

“This award is not based on a popularity contest,” Carter said. “You get here by the acts that you do that show generosity, charity and service. Some of those acts no one will ever know about other than the giver and the recipient.”

Help 4 Kids, a non-profit organization that feeds 2,000 kids in Florence county each weekend, was the first recipient of the medallion on Tuesday morning. The charity provides weekend meals to children ages 3-12. Dianne Welsch, president of Help 4 Kids, said the company’s growth is a result of a community full of generous people.

“We started out with 30 people,” Welsch said. “Those same people have stuck with us and now we have 100-150 volunteers a week. That says a lot about the community. It’s very humbling to see the effort of volunteers begin to affect kids in the area.”

Welsch said the efforts of Help 4 Kids not only aids students who are hungry, but it also provides a different perspective to students who volunteer with the organization.

“The hearts of our volunteers are being forever changed by this,” Welsch said. “Just the other day, I heard about a student who volunteered with us and then came to school on Monday with a box of Vienna sausages. She told her teacher she would never have understood the effects of hunger before Help 4 Kids because she herself had never experienced it. We are teaching the children of this generation what it means to care of your own. They will be the ones to go on and take care of society later.”

According to Welsch, receiving the medallion was an emotional milestone – one that provided a wonderful way to honor the volunteers who give so unselfishly to the kids of the Pee Dee.

“There are so many obstacles children and families go through,” Welsch Said. “Hunger should not be one of them.”

Second to be awarded a Marion Medallion was Powers.

Powers, CEO of Powers Property and Construction, founded the W.O. Powers Foundation, which has donated to FMU many times, as well as supported numerous charity causes in the Pee Dee.

According to Carter, Powers has been a constant aid to the community.

“Billy is constantly involved in hundreds of things throughout the Pee Dee,” Carter said. “You hear of a child who needs to go to St. Jude for treatment; mysteriously a plane appears to take that kid to St. Jude. Another child is about to drop out of school because they can’t afford tuition any longer; mysteriously a check appears to fund that child. You’ll never know about those acts. No one will ever know about those acts other than Billy Powers and God. The thing is, Billy Powers wouldn’t have it any other way.”

Powers was named “Businessperson of the Year” by the Greater Florence Chamber of Commerce in 1987. He was also named a Distinguished Citizen by the Pee Dee Boy scouts. Powers was also the recipient of the Distinguished Service Award by the Clemson Alumni Association.

Carter also said that Power’s many contributions were not made public.

“Billy’s philosophy is we were all put on this earth to help one another as quietly and anonymously as possible,” Carter said.