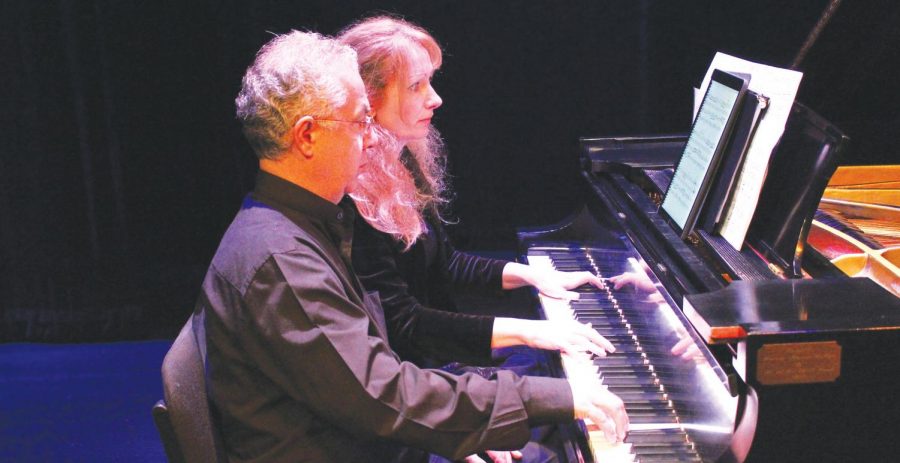 With the assistance of FMU, Associate Professor of Music Paolo A. Gualdi planned his sixth South Carolina Chamber Music Festival (SCCMF), which was held at the Performing Arts Center’s (PAC) Black Box Theater from Feb. 19-23.

This year’s festival included professionals from countries such as Brazil, Hungary, Italy, Serbia and the U.S.

According to Gualdi, the musicians performed for students and community members and worked with students in the classroom throughout the week.

Although FMU is the primary sponsor for the SCCMF each year, Gualdi is responsible for the selection of performers and overall organization of the event. Gualdi said each year he attempts to select a variety of styles of music for the festival to keep it interesting for attendees.

The week’s performances began on Monday evening with Gualdi and his wife, Danijela Zezelj-Gualdi, playing music by Beethoven, Ravel and Sarasate. Zezelj-Gualdi is an internationally renowned violinist. The couple met while studying for their master’s degree in Pennsylvania.

“I have known my wife and been playing with her for about 17 years,” Gualdi said. “That’s how I met my wife. It makes for a very special occasion, opening the festival with my wife for the first time and playing with her.”

According to Gualdi, there were a small number of returning performers this year, but the vast majority were new to the SCCMF. Aside from performing in the festival, the musicians offered three master classes for students, taught lectures and allowed students to talk to the musicians first hand.

The performers offered general business advice to music industry students and their background knowledge of the trials they faced to get where they are today in the music world.

Returning performer Kobie Watkins is a percussion master and jazz performer from Chicago, Illinois. Watkins spent time with FMU’s music industry students on Wednesday performing and recording a piece written by associate professor of music technology Brandon Goff in an hour and a half long live recording session, along with other pieces.

“It was a mind-blowing execution of two of my favorite Brahm’s pieces by Kobie,” Gualdi said. “It is a personal joy to perform and put on the event. Watkins is an excellent performer, it’s great to have him working with the students so closely.”

Blake Avery, a senior music industry student, interned for Gualdi this semester and assisted with the SCCMF. Avery dealt directly with performers before, during and after the event, assisted with the organization of the event and was a page turner for Friday evening’s performance.

According to Avery, Brad Richter, the guitarist who was originally scheduled to perform alongside cellist Viktor Uzur, forming the Richter Uzur Duo, fell sick and was unable to perform Friday evening. After Avery and Gualdi were informed of Richter’s illness, Uzur hired a pianist to take the place of the duo in the festival.

Vadim Serebryany traveled from Ithaca, New York to perform Friday for Florence community members and students. Avery said he served as the page turner for Serebryany, which was the first time Avery was given the task. Page turners assist the musician while they are performing by turning the pages of the sheet music for them, so they don’t have to take a hand off of their instrument.

Avery said the student turnout was higher this year than previous years, but he would like to see the event promoted better next February around campus and in the community to get more people to attend. He said he thoroughly enjoyed being Gualdi’s aide for the week and forming relationships with performers.

Although Gualdi has been the festival’s planner for the previous six years, he credits FMU tremendously with the success of the event each year. Without the help of the university, the SCCMF would not be possible and students would lose the opportunity to meet with artists such as the ones Gualdi brings in.

“As always, I am so grateful to FMU for making this happen and funding the guests who performed,” Gualdi said. “It’s a great contribution to our community, especially our students who benefit from professionals who are in town for a full week.”