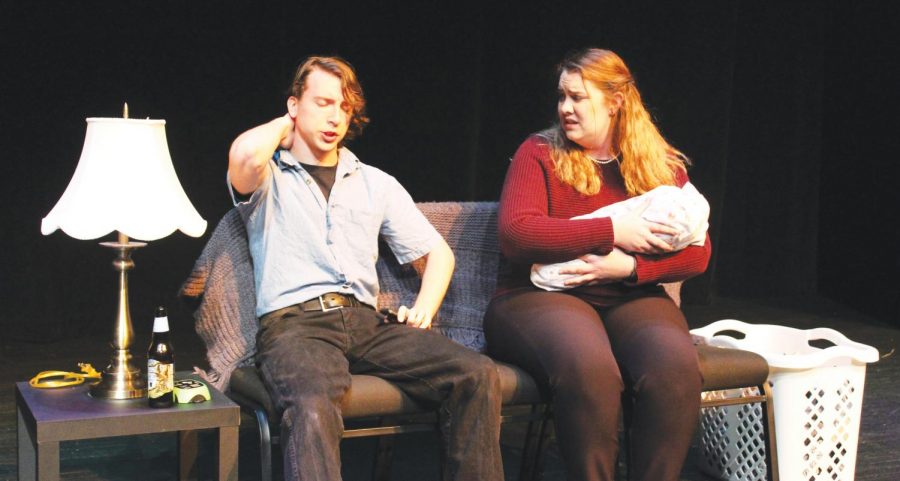 The festival began on Feb. 23 with the four playwrights Shari Tingle, Arlene Upsher, Dani Isgett and Malcolm Parker selecting directors and actors for their shows. Over the course of the next 24 hours, the four groups wrote, blocked and performed 10-minute plays to perform at the Feb. 24 showing at 7:30 p.m.

Plays covered a range of topics, such as infidelity, miscarriage and chicken slaughterhouses. The plays featured were: Arlene Upsher’s “The Weekend,” Shari Tingle’s “Baby Levi,” Dani Isgett’s “Don’t Love Me Back” and Malcolm Parker’s “Chicken Going to the Slaughterhouse.”

Malcolm Parker, president of the Patriot Players, said they hosted the 10-minute play festival to give students who are not involved in theatre a chance to be involved with a production.

“A lot of people are nervous about doing big shows,” Parker said. “So, we give them a chance to do smaller ones.”

Parker said this year’s play festival gave playwrights the power to write a play about whatever they wanted, which differed from last year’s themed festival. He said they decided to do this so there were four plays that were completely different from each other.

This year’s play festival was at the Black Box, which differs from last year’s show on campus. Parker said hosting the 10-Minute Play Festival at the PAC gave them better lighting and sound technology to work with.

Parker wrote and acted in his own play, “Chicken Going to the Slaughter House.”

The play festival gave some FMU students their first opportunity to take part in the theatre process.

For Arlene Upsher, a senior theatre arts major, writing “The Weekend” was her first time writing a play.

Upsher said it took her three hours of writing to finish the play, but it took the entire 24 hours to get the play ready for the showing.

“The Weekend” focuses on a mistress meeting up with the wife of the man she had an affair with. Upsher said the inspiration comes from the song “The Weekend” by SZA.

Other FMU students took part in the 10-Minute Play Festival to grow in their acting experience.

Sophomore theatre arts major Jessica Sistrunk said taking part in the festival was a way for her to become more comfortable on stage to prepare for her future.

“When I graduate, I’d like to be on the big screen with the professional actors,” Sistrunk said. “It helps me to get comfortable in front of an audience to one day get in front of a camera.”

The 10-Minute Play Festival was the second time she performed in a play. Her first show was the FMU Theatre Department’s production of “The Miser.”

Sistrunk said she was performing she was nervous to perform with only having 24 hours to prepare the play, but she overall enjoyed the experience she gained from the play festival.