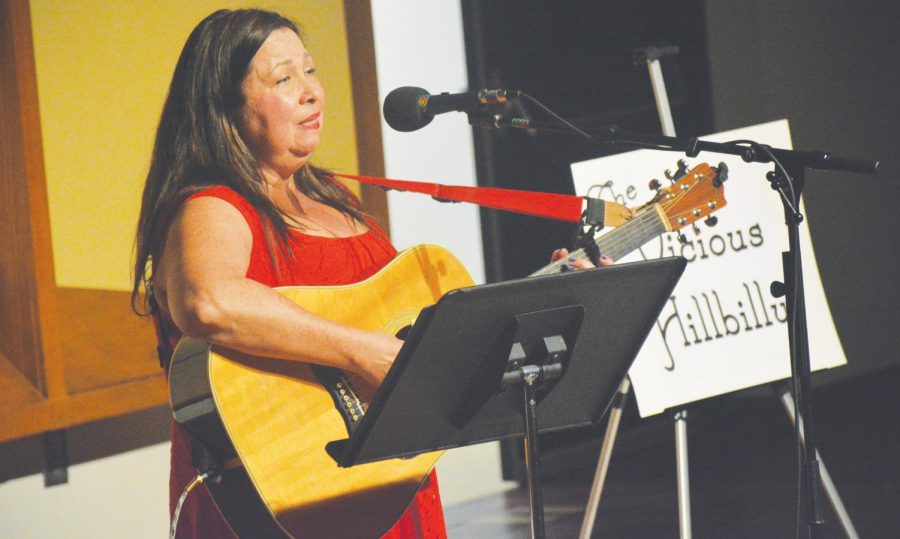 Dawn Larsen, associate professor of theatre, performed a one-woman show, “The Vicious Hillbilly,” for the public in the Kassab Art Gallery on Feb. 24.

The performance was outlined by 10 songs and short phrases on an easel, which told the story of dating after divorce. The performance focused on the humor of online dating.

The signs on the easel said things such as “music is my blanket and my weapon,” “no one is ever going to be like my grandpa” and “I am vulnerable and that’s okay.”

Larsen, who paused between each song during her performance to narrate the events that inspired the lyrics, said much of the CD is a result of becoming obsessed over something that happened, and realizing the only way to settle those feelings was to write music about it and then perform it.

“I was in a new town where I felt like an alien,” Larsen said. “I set up an online dating profile and realized a lot of things. One of the first, is that love is all I have to give.”

Larsen, who is a singer and songwriter, said she began writing when she was 13. She said after years of not writing, she finally picked up the guitar again.

“I quit writing for a long long time,” Larsen said. “I just started again six years ago. I started the songs that were on “The Vicious Hillbilly” show about four years ago. It was something that I was inspired to do.”

Larsen said “The Vicious Hillbilly” is a compilation of the last five years and her journey through many seasons of life.

“The Vicious Hillbilly is about my divorce, my son, family and dating at my age, especially in the south,” Larsen said. “It’s about the process.”

Larsen, who was also the president of the last traveling tent theatre, plans to continue performing the “The Vicious Hillbilly” and touring extensively in the future.

“I love to play at festivals,” Larsen said. “They are hard to get booked at, but just playing at them and being surrounded by a community of music is great.”

Larsen said as well as planning to perform “The Vicious Hillbilly” performance more extensively, she is also excited to offer more booking opportunities to people interested in hosting intimate gatherings.

“I’m doing a house concert tour, and I am also working on a new CD. The new CD will have a couple of songs from this show on it but also some older ones. It will definitely have the murder song on it. I am also working on another one-woman performance that focuses on more traditional music from the mountains and humor.”

Larsen also said as well as performing one-woman shows, she recently entered into a partnership with Table Rock State Park SC as the 2018 Artist-in-Residence.

“I’m basically going to write a song for them and they will use it in their advertising, it’s really cool,” Larsen said. “There’s just a lot in the works right now that I’m looking forward to.”

Larsen was also the winner of the 2017 Rock House Music Festival’s songwriting competition.