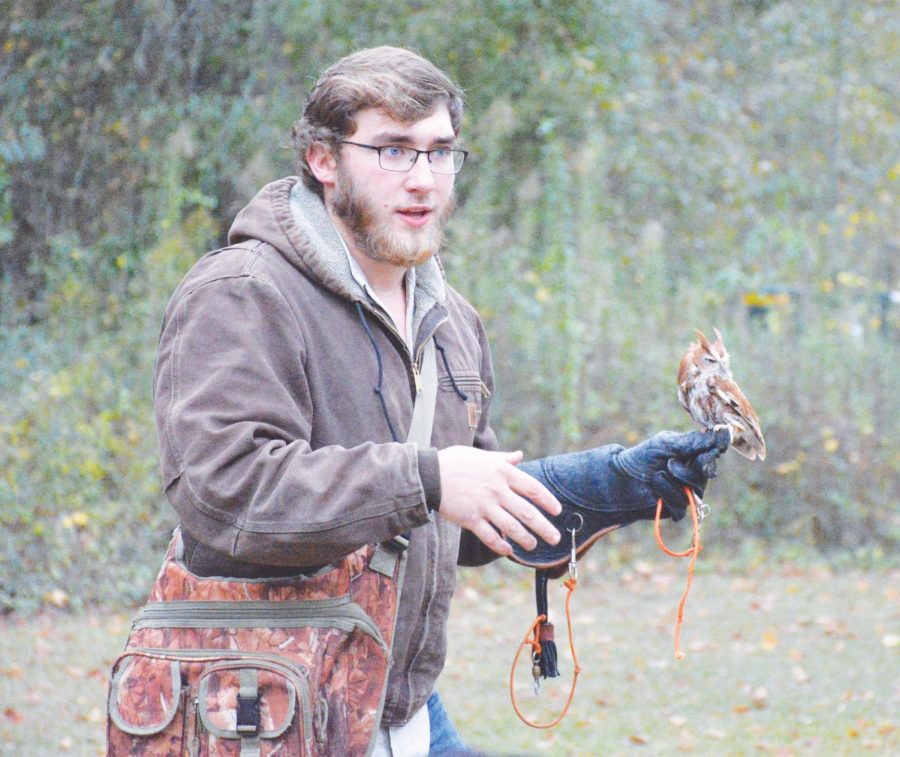 Junior Tyler Wright captures juvenile bird from the wild and trains them so they can survive in the wild.

For FMU junior Tyler Wright, afternoons and weekends are spent working on more than just schoolwork. Instead, they are spent training falcons.

Wright said he generally keeps only one while he is in college because falconry takes a lot of attention.

“You want to be fair to the bird because you take them out of the wild,” Wright said. “You want to have enough time to hunt with the bird and let him hunt a couple hours out of the day so he can be a hawk. So, if I’m not able to do that, then I limit myself to one bird.”

Wright focuses on trapping birds out of the wild and training them, to help conserve populations of various birds of prey. He said he only traps juvenile birds, or birds less than a year old.

Wright keeps birds for about two years at a time, training them before releasing them back into the wild.

Wright is a biology major pursuing a career as a veterinarian. He said he hopes to continue raising birds while finishing his undergraduate degree and after graduating from veterinarian school.

Wright said catching, training and releasing his first hawk was one of his most rewarding experiences. His first hawk struggled catching prey when Wright first caught him.

“Spending hours and hours a day working with him, and to finally see him in the wild was awesome,” Wright said.

Wright said when training birds he only hunts what is available. In South Carolina, squirrels and rabbits are more available. Wright’s bird, Talon, has caught 35 squirrels and two rabbits this year.

Although his primary focus is hunting with birds, Wright also spends time educating children about birds of prey using his bird Talon during his molting season.

Wright, who is also the senior vice president for education with Wildlife Action, said he works summer camps at Fork Retch and leads demonstrations with his birds.  He conducts up to 15 demonstrations over the course of the summer, Wright said.

Wright first became interested in falconry when he was 8 years old after attending the Pee Dee Deer Classic, an annual hunting expo at the Florence Civic Center, and seeing a falconer named Mitchell Brantley at an educational booth.

“I started bugging him to death,” Wright said. “I found out how to do what he was doing, and that I had to be 14 years old and take an examination and all that stuff.”

To become a falconer, individuals must take a 105-question exam from the South Carolina Department of Natural Resources, covering topics such as husbandry, hunting regulations and bird species. They also must find a current falconer to sponsor them.

Wright got Brantley to be his mentor during the training process.