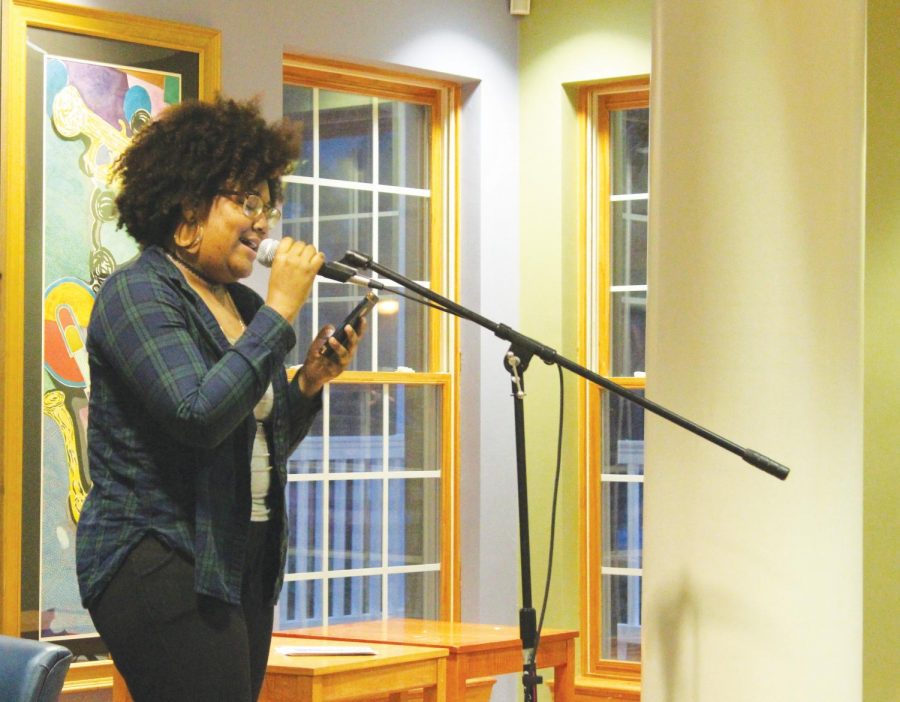 Mary Fountain reads a piece of her original poetry during the "Snow Island Review" poetry slam.

As a part of The Grille After Dark event on Feb. 28, FMU Student Affairs and the “Snow Island Review” (SIR) hosted a poetry slam for students to read their work aloud for judging.

Stewart, a junior at FMU, received first place with her poem “Hardened Hidden Heart,” which she wrote for an assignment using extended metaphor for Rebecca Flannagan’s poetry workshop course.

“People wear their hearts on their sleeves,” Stewart said. “I can personally relate to that. You need time to repair damage and my poem really talks about removing your heart from your sleeve and protecting it. It felt good to present something that I had thought about and worked on for a while.”

According to Stewart, it was also her first time reading a piece in front of an audience.

“It was shocking that I won because I was so nervous,” Stewart said. “It was exciting to be able to read something in front of my peers, but it was definitely nerve wracking since professors who have taught me before were there. I started shaking, but once I got into the groove I felt better.”

The second portion of the event allowed students to present any piece of original work or recite poetry from any work of their choice.

Fuller, also a junior at FMU, said for him poetry was something that has always come naturally.

“When I was a kid, I did a lot of sketching and art,” Fuller said. “I didn’t have too much support from my parents or anyone, so I let it go. But I didn’t need help from anyone when it came to poetry. I didn’t need to take art lessons or get guidance from someone, it was just something I was good at.”

Fuller presented an original poem titled “Illuminati Heart,” which he said was a love poem about a troubled relationship and a woman’s inability to devote her concentration to her lover.

“The poem is about this person asking this girl to be with him,” Fuller said. “But he is getting a little tired of her being distracted by the world. He really wants this girl to just see him.”

Fuller’s poem concluded with the man handing the woman a tarot card, a symbol of mysticism and one of the themes of his poem.

“I used the Illuminati for the title because it’s something we as humans get wrapped up in for no apparent reason,” Fuller said. “It’s kind of like constellations; I mean there are stars out there, but we kind of draw our own conclusions. You know, there’s really no belt out there. Orion’s belt isn’t actually a belt, but we decided to make it that. We have drawn that conclusion for ourselves.”

“Its purpose is to ensure that students have a free space for expression, as well as helping funnel the best poetry into the SIR journal,” Brown said. “Hopefully, its impact has been to help students get out of their shells and learn to enjoy poetry and literature, as well as conquering their stage fright.”