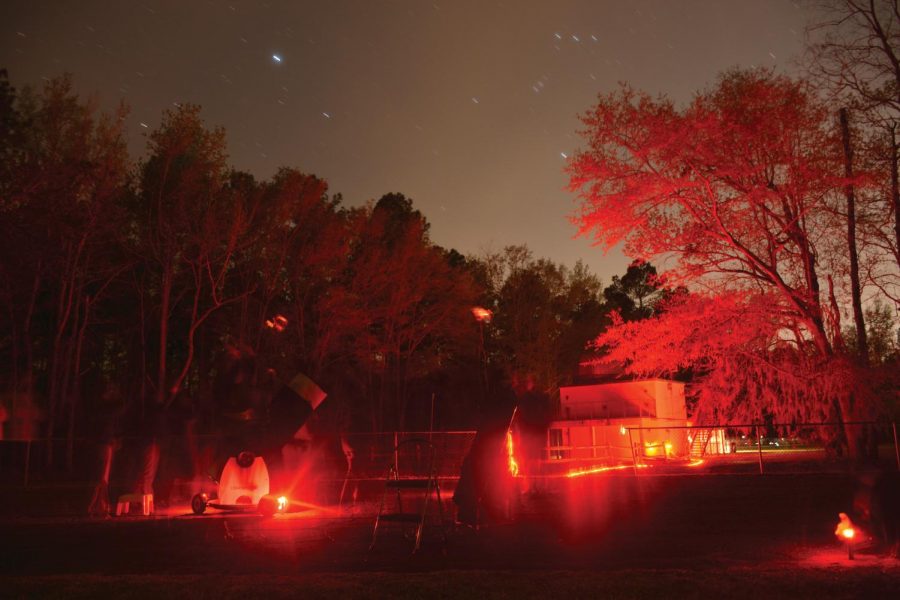 From April 2-6, the FMU Observatory opened for the public to view physics demonstrations.

The FMU Department of Physics and Astronomy and the Society of Physics Students held an observatory viewing session which was open to the public from April 6-7 at the FMU Observatory.

During the event, which lasted from 8-10 p.m. both nights, attendees could observe physics demos of various phenomena and hear explanations from members of the Society of Physics Students. Some of the demos included demonstrations of angular momentum and Bernoulli’s principle. After the demos, attendees could look through the telescopes that were set up on the track next to the observatory.

Coordinator of Astronomy Program and Director of Dooley Planetarium Jeannette Myers said they try to hold two public events each semester and the goals for each event remain the same.

“We’ve always done public events like this since Mr. Dooley started the planetarium back in the 1980s,” Myers said. “We’ve been doing observing events and planetarium public shows since 1978. We’ve really been trying to bring astronomy into the Pee Dee region for a very long time.”

“For many people, this will be their first opportunity to even touch a telescope,” Myers said. “When I was growing up, I never got to touch a telescope, so it was kind of exciting for me to go to my first observatory where I got to try a telescope out and see what it was like. We hope that when people see things through the telescope, they get a greater appreciation for what astronomers do and some of the neat things you can find when you look through a telescope. There’s a lot hidden up there.”

According to Myers, it is not common for observatories to be located on college campuses, and it makes FMU unique to have both a planetarium and an observatory. She said because of these resources, they want to ensure they are available to the public.

Jonas Smith, sophomore health physics major and member of the Society of Physics Students, operated one of the physics demos and answered questions from observers. Smith said he enjoys explaining physical phenomena that people observe in life but do not understand.

Bridgett Davis attended the event with her son and said she became interested in observatory events after she attended one at West Florence High School. Davis also said even though she had not attended any events hosted at either the Dooley Planetarium or the observatory, she looked forward to observing the sky because the activity always fascinated her.