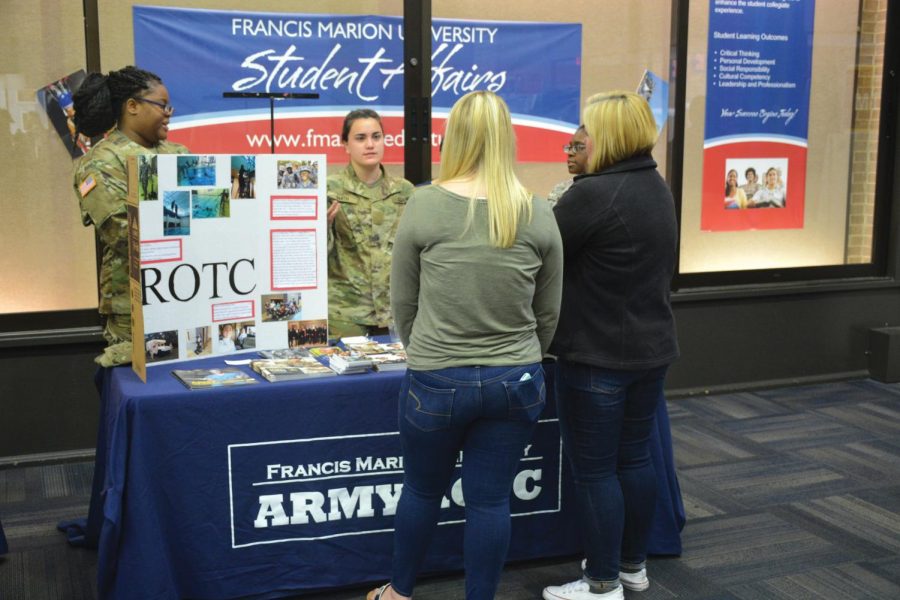 The FMU Office of Admissions and FMU Diplomats hosted the last Open House of the semester for prospective students on April 7.

Coordinator of Orientation and Admission Events Stephanie Bosch, an FMU alumna, said about 270 students registered and around 400 students and family members were expected to attend. Bosch said of the three Open Houses they hold each semester, this one had the highest number of registered students.

“Our goal is it provide a good experience for all of our prospective students,” Bosch said. “We have students come that have never been on campus before, and some that have come four or five times. We want each time they visit to be a new and different experience. We want every student to walk away with information they came seeking and not just for themselves, but for their families.”

Prospective students and their families gathered in the Smith University Center (UC) to check in and meet the Diplomats. Several departments and programs set up booths which lined the walls of UC and gave out information about financial assistance, the tutoring and writing centers, accounting and the FMU Reserve Officer’s Training Corps program.

After breakfast and check-in, prospective students transitioned to the Chapman Auditorium in the McNair Science Building, where FMU Associate Provost of Academic Affairs and Enrollment Management T. Alissa Warters welcomed attendees and introduced the other speakers, FMU President Fred Carter and FMU Provost Peter King. Carter spoke to prospective students and their families about his history as president of the university. King spoke next and discussed various topics of interest for the potential students. King told students FMU is one of the most efficiently run institutions in the state. Carter and King both discussed FMU’s affordability, which Carter credited to the university’s reputation. According to Carter, this allows more funds to be raised for various expenditures, so students are not unnecessarily burdened by high tuition.

Warters ended this Open House segment by announcing different academic overviews guided by Diplomats for those interested in different majors. After the overviews, interested students could attend informational seminars for various programs and departments such as the honors program, athletics and financial assistance. To end the event, families could head to the Ervin Dining Hall for lunch or attend a campus tour.

Chair of the Department of Political Science and Geography David White hosted academic overviews on political science, pre-law and criminal justice. White said his sessions discussed the requirements for these majors and the opportunities associated with them at FMU, such as internships and the National Model United Nations simulation at the United Nations headquarters.

FMU Diplomat Chalinda LaSane said her experience with the Diplomats at an Open House inspired her to become one.

“When I came here for Open House, the Diplomats were so welcoming and made me want to come here,” LaSane said. “I wanted to be able to welcome other people so they could also feel comfortable here at FMU. Meeting the Diplomats makes you feel like part of the school even if you’re not in it yet.”

Morgan Parker, a prospective student interested in pursuing nursing, said she plans to attend FMU in the fall. Parker said attending the Open House helped her learn more about the university and feel less worried about the adjustment to college life.