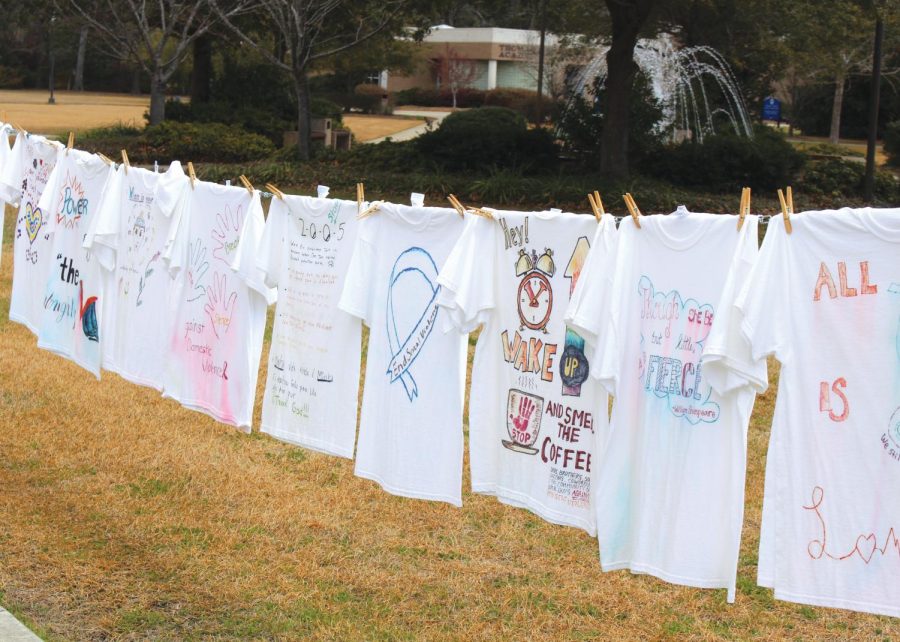 Students design T-shirts for “The Clothesline Project” display on the Founders Hall lawn during G-Week.

FMU participated in Gender Awareness Week (G-Week) from March 27 through March 31 to bring awareness to issues such as abuse and consent to faculty members and students.

Professor of English and Coordinator of Gender Studies Program Pamela Rooks said G-Week is a series of activities designed to help the campus community think about certain issues related to gender. Rooks said the issues can range from domestic violence or abuse to issues of consent between same-sex or opposite-sex couples. Rooks also said the week does not solely focus on women and women’s issues, but also men and men’s issues.

According to Rooks, G-Week was once called V-Week as it featured a performance of “The Vagina Monologues,” written by Eve Ensler and performed by Associate Professor of Theatre Arts-History Dawn Larsen. Rooks said at the time, V-Week was dedicated to raising awareness about violence, specifically against females, and raising money through ticket and T-shirt sales for the Pee Dee Coalition Against Domestic Violence.

Rooks said V-Week developed into G-Week, which allowed the department to have a wider audience and no longer exclusively focus its message on women’s issues and violence against women.

“Changing to G-Week gave us more flexibility in terms of dates because ‘The Vagina Monologues’ typically has to be in February,” Rooks said. “We also have not been raising money. The Pee Dee Coalition is involved with the activities and act as representatives for their organization. People from the Pee Dee Coalition manned the tables for ‘The Clothesline Project.’”

According to Rooks, “The Clothesline Project” is an effort to pay tribute and bring awareness to victims and survivors of sexual violence who are mostly, but not exclusively, females. Rooks said the idea behind the project is to have students design shirts to express their experiences with violence or honor someone they know who fell victim to or is a survivor of abuse. Rooks also said “The Clothesline Project” has been a constant in both V-Week and G-Week, the only difference being the shirts were on display for the entire week. T-shirts were hung for the duration of G-Week on the Founders Hall lawn for students to admire and create their own t-shirt for display.

Rooks said as coordinator of the gender studies program, she holds the title of G-Week committee chair and is responsible for organizing G-Week activities. Rooks said she worked with Professor of English Jon Tuttle, Vice President for Student Affairs and Dean of Students Teresa Ramey and Assistant Director of Housing and Residence Life David Wolfe, among others, to bring G-Week to life this year. According to Rooks, the Provost’s Office provides the committee with a budget so they are able to provide refreshments to attendees after performances, pay Rebecca Whitten, writer and solo actress in “To Feel Together: A One-Woman Show on Consent,” and for advertisement printing costs.

Rooks said the committee and gender studies program have high hopes for next year’s G-Week and hope more students participate in the events hosted on- and off-campus.

“Nothing is going to change overnight, but whether students are seeing “The Clothesline Project” or people are going to the events, I think G-Week achieves its purpose,” Rooks said.