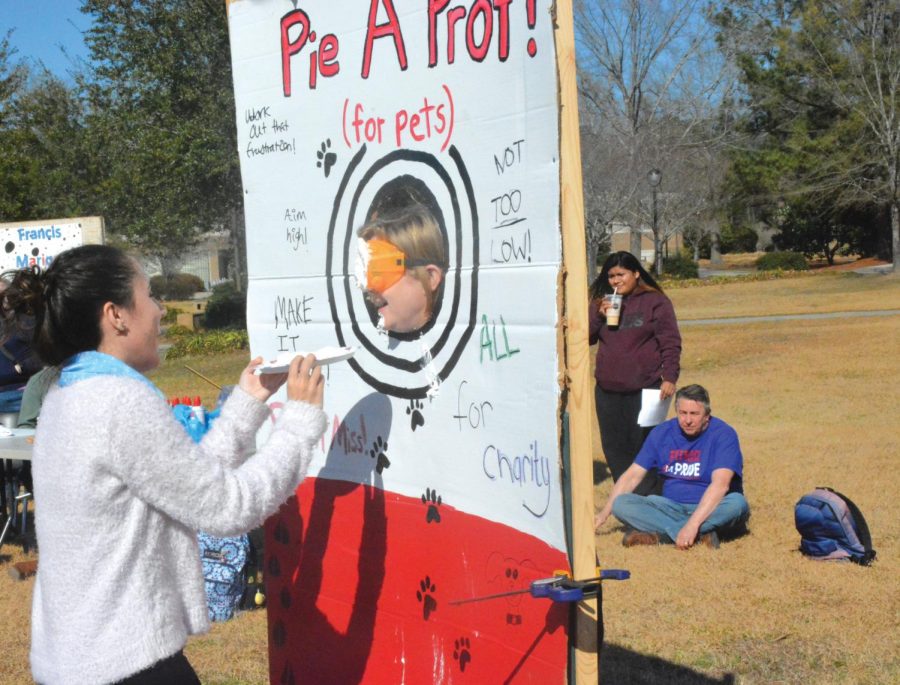 Student Elizabeth Floyd throws a pie at a professor to help raise money and awareness for the Marion county Humane Society.

The FMU Pre-Vet Club held its third annual “Pie a Professor for Pets” fundraiser on March 13 on the Founders Hall lawn to gather funds and supplies for the Marion County Humane Society.

Faculty members from multiple departments on campus volunteered to have students throw pies at them for the fundraiser.

Tamatha Barbeau, associate professor of biology and coordinator of the pre-veterinary program, said the Pre-Vet Club has hosted events on campus since 2015 to raise money for animals and shelters in need. In addition to the beneficiary for this event, they have held fundraisers for the Florence Area Humane Society, Darlington County Humane Society and DogGone Shelter Intervention of Latta, S.C.

“The event won’t always be the pie event, but it’s going to be some sort of fundraiser,” Barbeau said. “So, what we do is a fundraiser for one of the shelters in the Pee Dee, and we try to make it for the shelters that are really desperate.”

According to Barbeau, the last meeting they had that lead to the Marion Animal Shelter being selected was influenced by a fundraiser for the same shelter last semester.

“When we went last fall to deliver the supplies, I had never been there, and when we went there, we were shocked,” Barbeau said. “So, when we had our meeting this semester to decide who we’re going to do it for, we said ‘let’s do it for the Marion shelter again.’”

With the number of students and faculty who participated, and with the pie throws selling for $1 for a five-foot throw or $5 for a one-foot throw, the Pre-Vet Club raised $80.

Additionally, they received several bags and boxes full of blankets and towels, dog carriers and 12 55-gallon drums donated by the Coca-Cola facility near Hartsville, S.C. to be used as dog kennels.

Barbeau said the Pre-Vet Club also holds a supply drive every semester and what they receive from that exceeds their monetary donations. The recent supply drive took place from Feb. 16 to March 16, with donation boxes stationed in department offices around campus.

According to Barbeau, “Pie a Professor for Pets” gives students the opportunity to decompress, especially around midterms and before spring break. She said the event itself is enjoyable but is even more so from the candidness of participating faculty.

“It’s fun for students and we have a lot of faculty that get involved because they have a really good sense of humor,” Barbeau said. “Even Police Chief Tarbell has always participated. I don’t know if there’s an element of ‘ha-ha we get to get you back’ [among students], but it’s all done in good humor.”

Fran Coleman, assistant professor of music industry, volunteered to be hit with pies because she loves animals and benefiting the shelter located in the county she lives in.

“I just moved to Marion, so when I saw it was to help animals and it was to help the animals in my neighborhood, I figured I needed to step up,” Coleman said.

Senior biology major Katie Piner participated in the event by throwing a pie at a professor and assisting with the event. Piner said the event, in addition to helping animals in need, was a great way to get involved and meet new people.