Professor reflects on career at FMU

Graduates leave behind advice for students 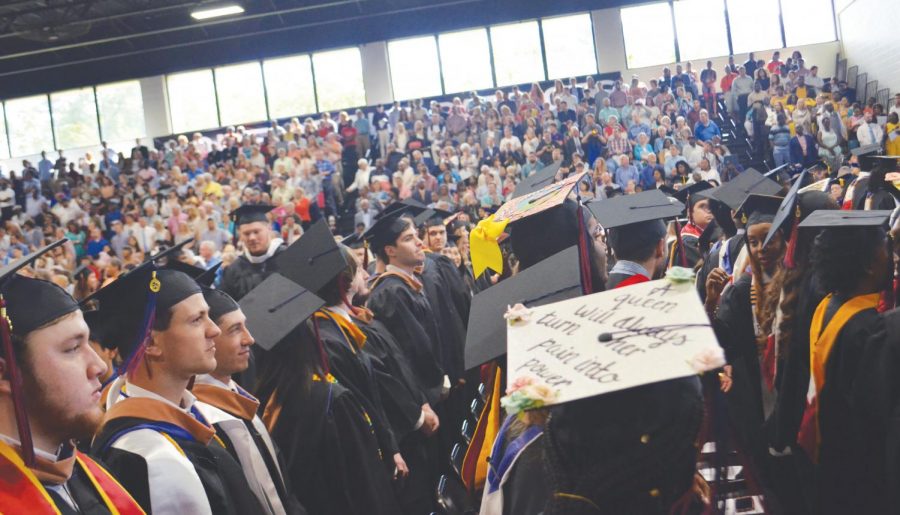 FMU awarded a total of 346 degrees to graduates at its spring commencement ceremony. This class was one of the largest to graduate in an academic year in the university's history.

Francis Marion University (FMU) held its annual  Spring Commencement ceremony on May 5 in the Smith University Center (UC) to celebrate graduates as they move forward into the next chapter of their lives.

The ceremony began with the graduating students greeting loved ones before the guests were seated for the beginning of the commencement. A chamber orchestra played while the audience members were being seated, and the FMU chorus began the ceremony by singing.

Once the singing concluded, opening statements were made by Peter King, university provost and professor of biology. The President of FMU, Fred Carter, then began the ceremony and welcomed students to the celebration of their undergraduate, and graduate level, achievements.

“Welcome to commencement, the most joyous event on this universities campus,” Carter said. “No one in this room takes more pride in your accomplishment than the men and women on this faculty.”

Theater graduate Shari Tingle said she will miss the sense of community she felt during her time at FMU, especially with her professors, and the activities she would engage in with friends on and off campus. Tingle said her post-graduate plans are to travel to Rhode Island to be a production manager on a new film followed by a trip to Myrtle Beach to be in a movie.

Several graduates said the best advice for current students is to read the syllabus and not wait until the last minute to do things. They also commented on how FMU listens to its students and makes efforts to solve problems and answer questions when issues arise.

Cindy Rewis, a non-student, attended commencement to support her husband who received a Bachelor of Science in Nursing.

“It’s so important for me to come to graduation and support everything he has accomplished in four years of college,” Rewis said. “I think it’s important for the professors to come too because they are the ones who helped you reach this point.”

Rewis also said, as her husband graduated this semester, she would encourage anyone wanting to return to school to not hesitate to do so because it is never too late to attend college.

Gabe Hutson, student president of FMU honors, said it is important for non-graduating students to attend graduation to see the results of working hard and to celebrate the next generation of workers.

Ilia Campbell, who graduated with a Bachelor of Arts degree, said the highlight of her college career was her senior independent study.

“My advice for other students is the sooner you start planning the better because you don’t want to be at graduation and not have your next step planned,” Campbell said.

Tamatha Barbeau, associate professor of biology and coordinator of the Pre-Veterinary Program, attended the event to congratulate graduating students of hers as well as the rest of the graduating class.

“The making of a graduate takes a lot,” Barbeau said. “It takes intelligence, but more than that, it takes persistence because you are going to want to quit. It’s going to get hard, but if you can just stick with it you will make it. It’s a marathon and you really have to hang on to why you are here to make it to the end.”

Linda Jacobs, professor of literature, attended her last commencement ceremony before retirement to congratulate her beloved students and celebrate her career at FMU.

“I believe it is imperative for professors to attend graduation because it is such an important occasion to show the graduates you are proud of their accomplishment,” Jacobs said. “I believe it’s a reminder to faculty why we all do this job and to show students who are not yet graduating how great it will be when they make it to this step.”

According to FMU, when combined with the graduating Fall 2017 class, these graduates made up the fourth-largest class to graduate from FMU in an academic year.