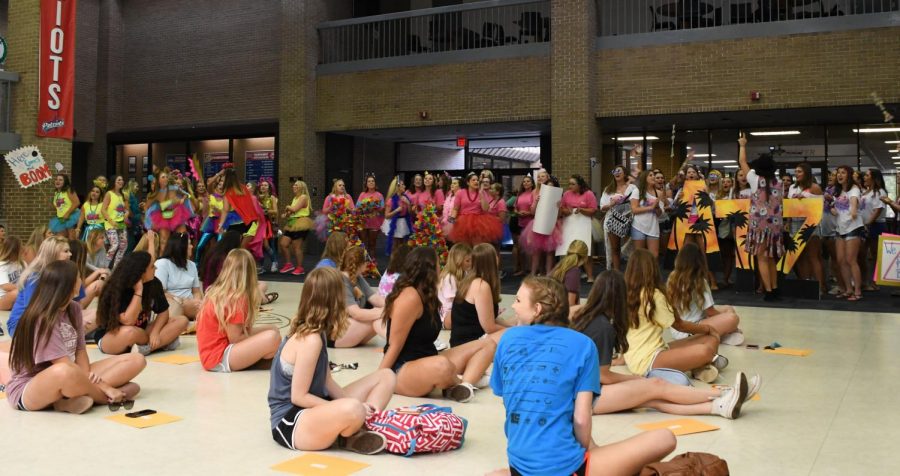 Potential New Members (PNMs) waiting in the Smith University Center (UC) on Sept. 9 with members of NPC sororities to run out to the sorority from which they received a bid.

Marisa Littlefield, a member of Kappa Delta (KD), said the recruitment activities over the weekend were successful in more ways than one.

“This is my third recruitment week,” Littlefield said. “I went through as a PNM my first year and then went through these past two years as a sister. Each year I get to see how open the new members are going to be when they meet all the sororities. This year was so refreshing. All the new girls came in really wanting to get to know every sorority. I didn’t feel like girls this year came in with only one sorority on their mind. They were really open to us all, and that really makes recruitment more enjoyable for everyone because it allows for genuine connections to be made.”

Littlefield also said while recruitment is a three day period at FMU, preparation for the event starts as early as move-in day.

“Sororities really start meeting PNM’s during move in,” Littlefield said. “All of us get out and help move in new students. It’s a way to informally meet people and get our faces out in the FMU community so girls are encouraged to rush. We do these things to show the involvement Greek Life has on campus.”

In addition to their work during move in day, each chapter hosts a series of workshops over the summer for their members to bond, learn recruitment traditions for their sorority, learn how to talk to PNMs, work on their recruitment weekend decorations and much more. There is also an ice cream social the week leading up to recruitment so PNM’s can meet members from all sororities and meet other girls going through recruitment.

Madison Cox, a member of ADPi, said the diversity of rush is one of the reasons why she loves Greek Life.

“The best part of rush honestly is meeting so many unique people with unique stories,” Cox said. “Not even just the new members of ADPi but meeting all types of girls from all different parts of South Carolina was amazing. They all had different reasons for being there and going through recruitment, and I think that’s a great picture of Greek Life.”

Cox said while recruitment is different every year, aspects that reflect each sororities’ core values stay the same through each years’ recruitment process.

“We screamed and chanted about how much we love Alpha Delta Pi,” Cox said. “The girls we were trying to recruit made bags we could send to Ronald McDonald House, which is our philanthropy. We are going to use those bags to send blankets and goods to the Ronald McDonald House in Columbia.”

Following recruitment, new members will begin to take official steps to being initiated into their chosen sisterhood, followed by big little reveal.   New members go through programs that educate them on their sorority’s history and rules which are led by an older member who has been elected to their chapter’s chair for new member education before initiation. Each organization has their own guidelines they must follow, given by their national office, to educate new members before initiating them into the sorority.

When new members are selecting a big, someone who will be their mentor throughout their years in the sorority, they spend time getting to know different girls in their sorority to see who they bond with and can look up to. After a few weeks, they vote on who they want as their big, and a reveal is held to let the new member know who her big is.

Each year, sororities rotate recruitment responsibilities. According to Littlefield, KD was president of Recruitment Week.

“Being president of recruitment doesn’t have much bearing on a sorority,” Littlefield said. “It’s mainly for Rho Gammas, two sisters that disaffiliate from their sorority to make sure girls going through recruitment find the best fit for them. They plan formal recruitment and the responsibilities vary depending on which sorority is president, VP or secretary for the recruitment period.”