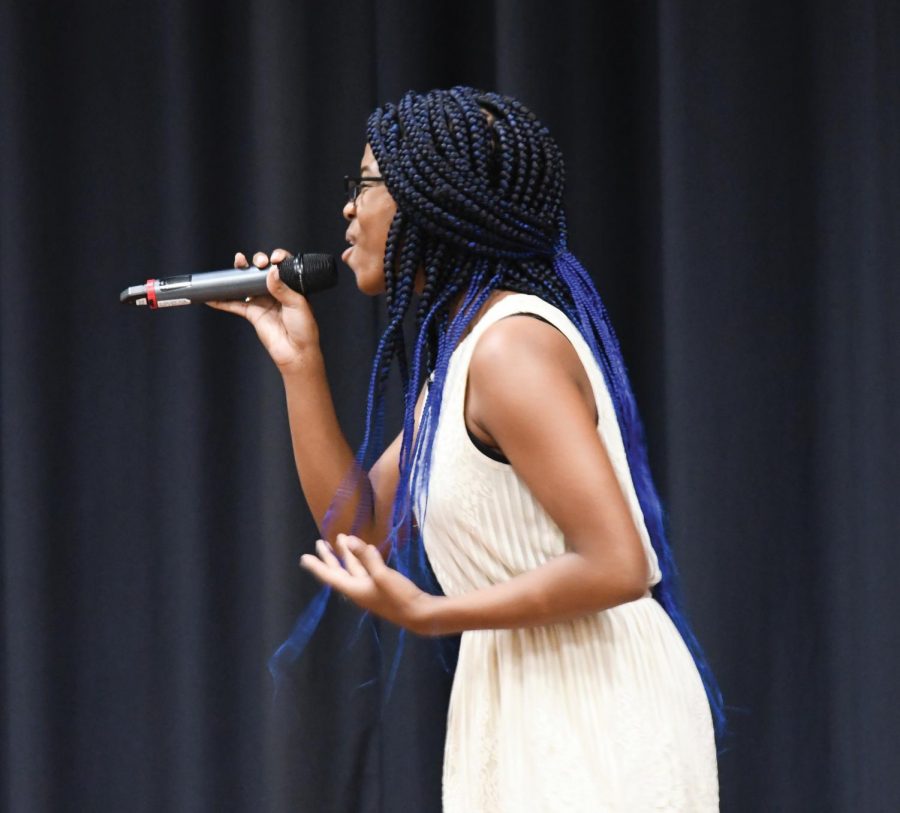 Tasia Phillips auditions for FMU's Got Talent. She received the golden buzzer for her performance of "And I'm Telling You I'm Not Going" by Jennifer Hudson. She will be continuing on to the next round of FMU's Got Talent.

FMU’s Campus Activities Board (CAB) hosted FMU’s Got Talent from 7-9 p.m. on Oct. 18 in Chapman Auditorium in the McNair Science Building.

The show was the first of four showcases after CAB held auditions to find students with various talents. Students sang, danced, rapped, performed spoken word and played piano. Twenty students participated in this show, and five will be eliminated after every show. The overall winner will be named in the final show during homecoming week. Contestants frequently involved the audience by asking them to snap, dance or sing along.

The show opened with an explanation of the voting process by Caroline Shelley, executive chair of CAB, and Gregory Pilot, a CAB board member. The hosts, Rashad Nelson and Glennie Tanner, were then introduced.

Audience members decided who would advance through an Instagram poll, but three judges were also present to give contestants constructive criticism on their performances. The judges were Erica James, clinical/counseling option coordinator and assistant professor of psychology; David Wolfe, assistant director of housing and residence life; and Alex McGill, student life specialist.

During each showcase, the judges will collectively have a golden buzzer that can be used to automatically send a contestant to the next round, regardless of audience voting. Tasia Phillips won this showcase’s golden buzzer for her rendition of “And I’m Telling You I’m Not Going” by Jennifer Hudson.

Phillips said she has grown up singing and wants to pursue it as a career. She also said she was always the youngest person in the various choirs that she has participated in.

“Every time I hear about talent shows, I’m one of the first to jump at the opportunity to showcase my talent and get that experience singing in front of a crowd,” Phillips said.

Phillips said her talent is something that has afforded her other singing opportunities in the past.

“Another thing that made me see I was special was when I was able to sing for my high school graduation,” Phillips said. “Singing is something that I’ve always felt if I don’t use it, then I’m going to lose it, so I try my hardest to use it every opportunity I get.”

Phillips said she found it hard to believe that she had won the golden buzzer. She also credited her faith as the determining factor in her success.

“God is really crazy,” Phillips said. “I prayed before I went on stage and told him to take me through the song and that’s what he did.”

Terrik Boatwright, a member of CAB, said CAB had the idea for the event because they wanted to host a talent show with a unique spin.

“With this talent show being a series, I feel that it gives students something exciting to look forward to since the first show was great,” Boatwright said.

There was also an intermission where the hosts encouraged the audience to come to the stage for several dance contests.

CAB will have its second talent showcase from 7-9 p.m. on Nov. 8 in Chapman Auditorium.