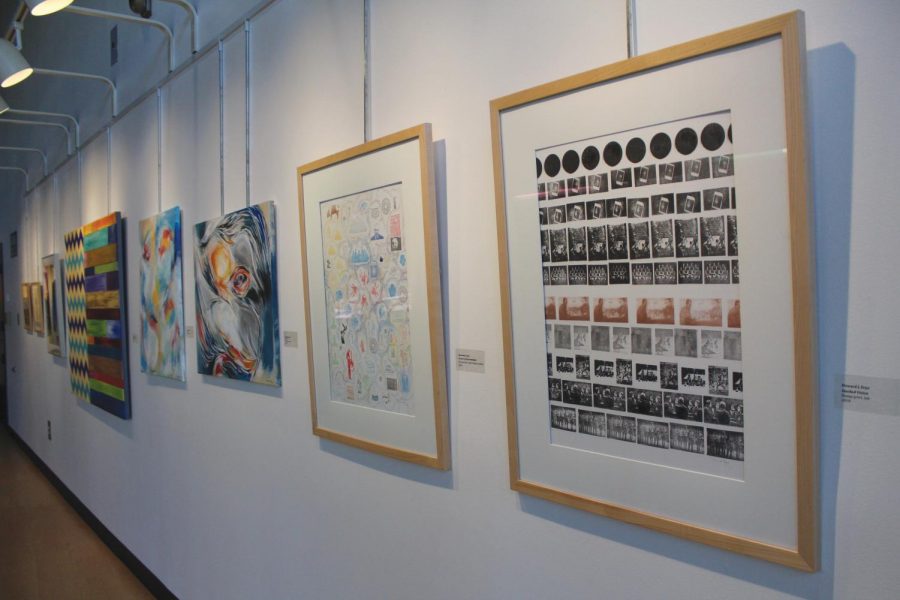 From right to left, Howard Frye illustrates his collection of stamps from his travels. He is followed by two abstract pieces by EunJung Chang.

Sallenger, Adele Kassab Art Gallery curator, said they created the exhibit to provide an opportunity for the campus and Florence community to view examples of personal research by these faculty, which encompasses a wide variety of mediums and methods.

Julie Mixon, associate professor of art – photography, has six pieces included in the exhibit. The pieces show the different mediums and methods she employs in her work with images. Mixon said she takes a very hands-on approach in her photography work to develop her images into the finished artwork.

“I specialize in alternative processes in photography as well as mixing analog, which is film photography, with digital media,” Mixon said. “I like to do a lot of hands-on processes instead of just taking a picture and printing it. I like to use processes that involve my hands, whether that be image transfers or layering wax onto images. Usually my artwork is a mixture of a number of different processes.”

Mixon also said her artwork is contingent on the idea she wants to convey from conception to realization, which varies the effect on viewers.

“I start with a concept or an idea that I’ve been thinking about and then I make imagery that demonstrates that concept,” Mixon said. “As an artist, the decision of how you present your work affects the way the viewer interprets it. The use of wax, the use of diptych, of wood are made in regard to my conscience. So that’s why my artwork seems like there’s something more to it because there is. It’s not just a pretty picture; there may be a narrative there or something that relates to myself or my beliefs.”

When it comes to presenting her artwork, Mixon said she always feels somewhat apprehensive; however, she thinks it is important to consider viewers’ comments, particularly those of faculty, to better understand how her work can be interpreted and how she can clarify her intentions.

Mixon said since she teaches every photography class at FMU, she has to stay up to date on the materials and techniques that students need to learn and are interested in, outside of what she uses in her own work.

According to Mixon, she did not always want to be an artist but became interested in college. She said she went to graduate school to further develop her skills instead of attending for the purpose of becoming a teacher. She said she discovered an interest in teaching when she had to teach as part of her studies in graduate school.

Mixon earned her bachelor’s from Barton College and her master’s from East Carolina University.

Gregory Fry, associate professor of art – graphic design, has five pieces included in the exhibit, which show the various mediums he works with, particularly printmaking.

Fry said the pieces in this exhibit show the differing directions his work has taken.

“The work in the show displays differing directions in my current work,” Fry said. “This includes drawing, printing and digital. My inspiration seems to lead back to insects as a more of a metaphor. You can pick up on the symbolism in many of my works.”

According to Fry, having people see his work provides feedback and insights about his work that he might have overlooked and informs him of how his work affects viewers. He also said any apprehension he may feel does not prevent him from sharing his work with the public.

“There is always a risk of putting your voice out there for others,” Fry said. “I do consider the comments and many times people will see things in the content of the work that should be obvious but I miss. Getting other viewpoints is always of interest.”

Additionally, Fry said even though he knew he would always be creative in some way, he did not know that teaching would be his calling.