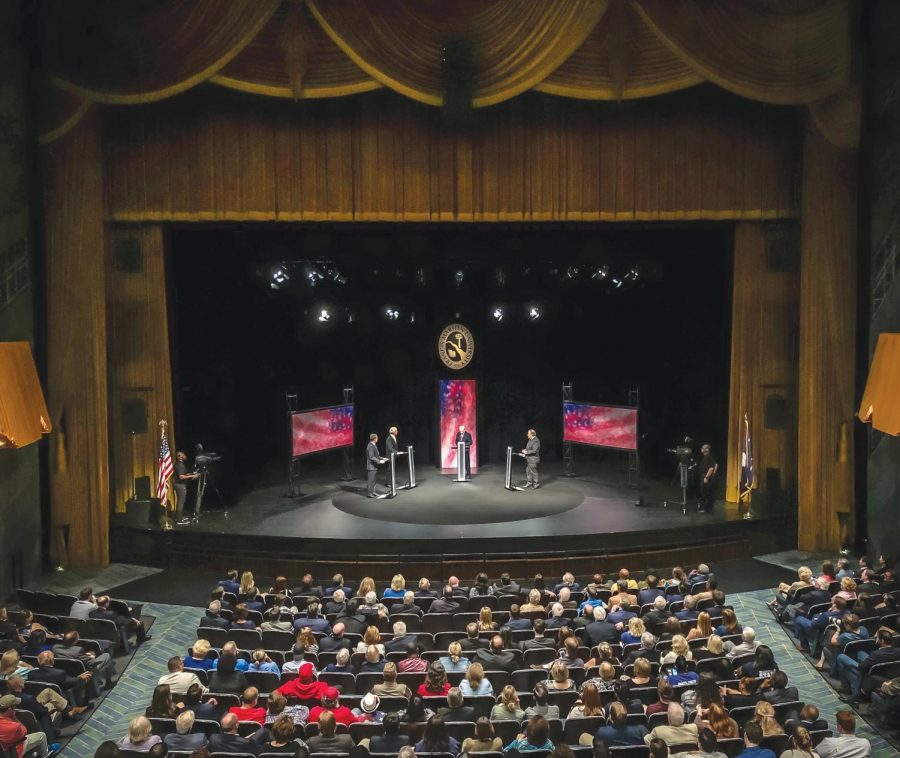 In the first of just two debates before Election Day on Nov. 6, the two men argued why they should be elected as governor. McMaster, a Republican, portrayed himself as a candidate that would increase the number of jobs in the state while managing low taxes, saying that he helped with the 23,000 new jobs and $8 billion in investment that have come to South Carolina since he has been governor.

“More people are working than ever before,” McMaster said. “And the next four years are going to be even better. We’re going to win, win, win.”

Smith, on the other hand, presented the case that McMaster cares only about re-election, not the interests of South Carolina residents, saying that the state is lagging behind on healthcare, education and infrastructure. Smith said McMaster might have been adequate in the past but that he no longer cares about the future of South Carolina.

“Henry, if this is winning, I would hate to see what losing looks like to you,” Smith said.

With FMU hosting the debate, the arguments naturally turned toward higher education. Smith argued that a lack of investment in higher education is what has caused South Carolina to have the highest tuition rates in the Southeastern United States.

“We have to have higher education accessible to all of our people in the state, and because of the high cost of tuition, it is becoming inaccessible,” Smith said. “And I have plans to change it. However, Henry, you vetoed $7 million dollars for Francis Marion University.”

McMaster defended his veto of funds to FMU, saying they came from back-room deals and that taking funds away from the budget would be “an exercise in unaccountability.” He said that higher education would be improved by general economic growth, and that the technical college system could be better utilized for residents’ educated.

“Every dollar that is being spent by the schools needs to be understood by the legislature, the governor and everyone,” McMaster said. “It needs to be budgeted and authorized for those schools to spend.”

The candidates also discussed the increasing intensity of storms in South Carolina and how they would respond to future floods and hurricanes. During Hurricane Florence, McMaster managed disaster relief as governor, while Smith served as a major in the S.C. National Guard.

“I issued an executive order creating for the first time, a commission on flooding,” McMaster said. “We will bring the best minds, the best ideas, from infrastructure construction to preventative measure we can take, from things such as sea walls and everything in-between.”

Smith pointed to his time as a state representative to highlight his ideas on disaster relief, saying that he helped the South Carolina legislature secure funds after the recent hurricanes.

“As governor, I’ll be there with those who are fighting, not do as Henry did when he vetoed desperately need flood relief, and it had to be upon the Republicans and Democrats to come together to override his veto,” Smith said.

One area in which the candidates had some overlap in their ideologies was gun control.  While Smith was in favor of more gun control, such as not clearing people to buy guns if they fail an FBI background, they both agreed that Frederick Hopkins, the suspected killer of Police Sgt. Terrence Carraway, did nothing inherently inappropriate by owning 129 guns.

“My criticism of McMaster would be that they kept mentioning how he vetoed this and he didn’t send money to this or that, but he didn’t really address it,” Anderson said.

Student Government Association President Connor Graham said she had been following the race sporadically, but it really attracted her attention when FMU announced that it would host the debate.  Graham said she was particularly interested in the debate over education.

“As student government president and as a student body president, I want the best for our students, and that doesn’t just mean on our campus,” Graham said. “It’s very important for us to know what’s going on with legislation and policies.”

McMaster and Smith will debate again on Oct. 25 at Greenville Technical College, with their choices for lieutenant governor debating Oct. 29 at the South Carolina Educational Television (SCETV) studio. SCETV will stream both debates.