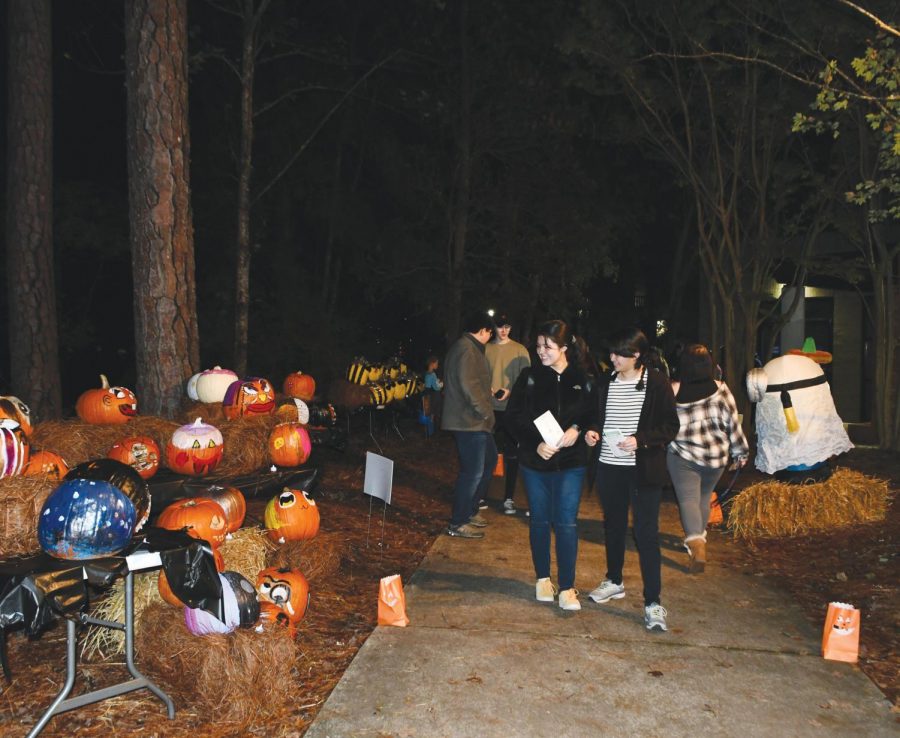 FMU held its first FM A’Glow event from 6:30-9 p.m. on Oct. 27 for students and faculty to walk around campus and admire carved and decorated pumpkins.

The pumpkins were placed on a lit path that looped around part of FMU’s campus, which began at the back of Parking Lot H, continued to the dorms and ended back at Parking Lot H.

FMU students, faculty, and local public schools decorated, carved and lit the pumpkins.  Over 400 decorated pumpkins were displayed along the loop, and many pumpkin carvers stood by their pumpkins to greet attendees.

There was also a series of contests for the pumpkins, with categories such as “scariest” or “most artistic.” Gabriel Hudson and Maitland Weaver judged the pumpkin contest. FMU’s Teaching Fellows won first place for the people’s choice award for a display satirizing the cost of college, with one pumpkin simply reading, “Srry, too broke to be creative.”

Daniel Osborne, a West Florence high school student who attended the event, said he appreciated the creativity that was showcased by the event.

“I thought the best part was seeing the pumpkins the kids from the elementary school made,” Osborne said. “I mean, how can you look at those decorations those little kids made and not think that’s the coolest thing?”

“I thought most of the pumpkins were really well done,” Martin said. “I know if I had to carve something like these pumpkins, I’d never be able to do it.”

KJ’s Market provided the pumpkins for the event, and any student organization was allowed to request eight free pumpkins and purchase any amount after they had received those.

The pumpkins were not the only highlight of the event. There was also a face-painting station and some organizations gave out Halloween candy. The Grille also served Halloween-themed food, such as ghost burgers.

Originally, FM A’Glow was scheduled to begin on Oct. 26 and continue until Oct. 27 but rain made it difficult to walk around the loop and leave the pumpkins undamaged, so the Campus Activities Board held a pumpkin-decorating party instead on Oct. 26.