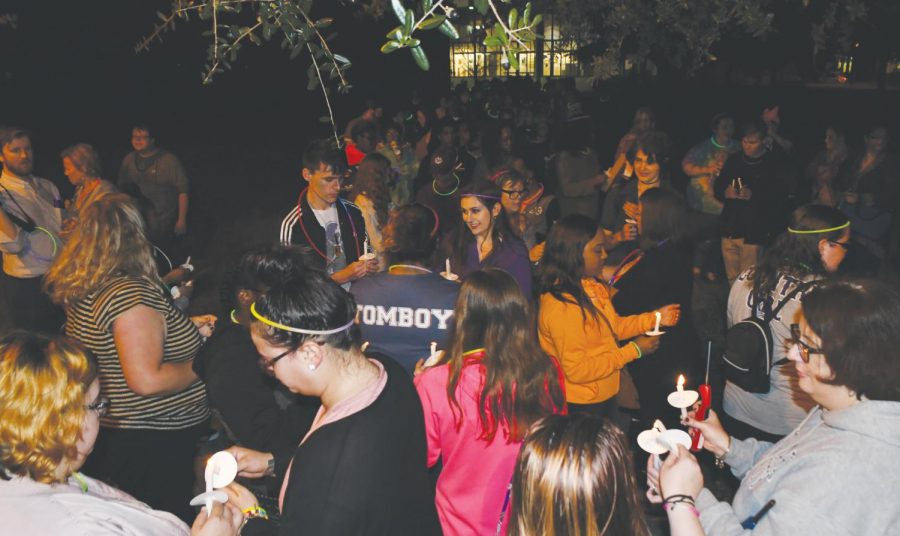 Students light candles to symbolize the light that shines through the darkness of sexual assault.

FMU students and faculty took a stand against domestic and sexual violence at the Take Back the Night event, a march and rally designed for students to make their voices heard, on Nov. 1 from 7-9 p.m.

The event began with a march through the woods of FMU’s campus as attendees chanted to show support for victims of sexual violence.

Suzanne Barnett, assistant professor of English and one of the organizers of the event, said the location of the march was meant to be symbolic.

After the march, students gathered at the fountain outside of Founder’s Hall for a candlelit rally. Students and faculty read poems and stories dealing with domestic and sexual violence.

Charlene Wages, Title IX coordinator, also spoke to explain Title IX, a program that includes a set of procedures that guide the university’s response to sexual misconduct. Members of the Pee Dee Coalition Against Domestic and Sexual Assault (Pee Dee Coalition) and Campus Police also spoke at the rally to express support and offer students assistance.

Barnett said a major goal for the event was to help students understand the information available to them on campus and know who they could contact if they need assistance, such as the Title IX Council or members of the Pee Dee Coalition.

“I teach a lot of first-year students and a lot of them don’t know the counseling center exists,” Barnett said. “We wanted to make sure campus police were there. I think a lot of students think of them as the people that bust them or give them parking tickets, but they’re seriously committed to making sure students feel safe on campus.”

Barnett said some of the international Take Back the Nights events are for women only, but that she wanted FMU’s event to be more inclusive.

“We always envisioned it as an inclusive event in which every student on campus was invited to participate,” Barnett said. “We wanted to make sure people realized it’s neither an event nor an issue that affects only women. It affects men, women and LGBTQ community members, who are exponentially even more affected by these issues.”

Anna Patton, head of the event’s student organizing committee, said she wanted to hold the event because many people believe sexual violence only happens to a small percentage of the population.

“It’s common to think ‘It could never happen to me or someone I know’ or that it only happens in other places,” Patton said. “However, sexual violence can happen to anyone. This event was designed to raise awareness, provide resources for survivors and empower our campus community so they know they have a voice. They’re not alone at FMU.”

Patton said she hoped that those who attended the event gained a sense of security.

“It’s evident from how many people came, that students, faculty, staff, security, administration and the FMU community care for each other,” Patton said. “This is an issue we’re unified on, and they should know that everyone at FMU has a family looking out for them.”

Senior Haley Heaton participated in the event by reading a poem alongside Patton. She said she wanted to participate because she was a victim of sexual assault. She also said the issue is too prevalent in the U.S currently and that people do not speak up out of fear that the abuser will be protected.

“The victims are so often blamed or not heard and it is time for a change,” Heaton said. “I don’t want to be a victim anymore. I want to be a survivor, a protector and a leader in my community to invoke change.”

Heaton said she hopes students learned from the event.

“We hope that it made people more aware of the issue at hand and to encourage people to stand up to one another,” Heaton said.

Members of the Pee Dee Coalition handed out a sheet with statistics explaining why they felt the rally was important. According to them, over 570 people experience sexual violence each day and someone is sexually assaulted every 98 seconds in the U.S. Additionally, one out of every four women and one out of every six men will be sexually assaulted in their lifetimes.

Before and after listening to the speakers, students could get hot chocolate, candy and listen to music. Barnett said this was intended to provide an atmosphere of joy to celebrate survivors of sexual and domestic violence.

“We wanted it to be a bit of a celebration,” Barnett said. “Most people are either the victims of sexual violence or know someone who is. It’s an issue that really affects everyone so we wanted people to feel that they were not alone.”

Patton encouraged students who have been affected by sexual violence to reach out for help.

“There are people who care about them and their recovery, both physical and emotional, and they should never feel like they have to go through this alone.”

Take Back the Night gets its name from an organization founded in the 1970s that aims to end domestic and sexual violence. According to Barnett, the organization does not sponsor all rallies, it did not sponsor FMU’s, but anyone is encouraged to use their mission statement to create events.

Barnett said she hopes to continue to have the event every fall semester, since the majority of college sexual assaults occur in the fall.  She said she wants it to be a corollary event to G-Week, an event that FMU holds every spring to bring awareness to gender-related issues.