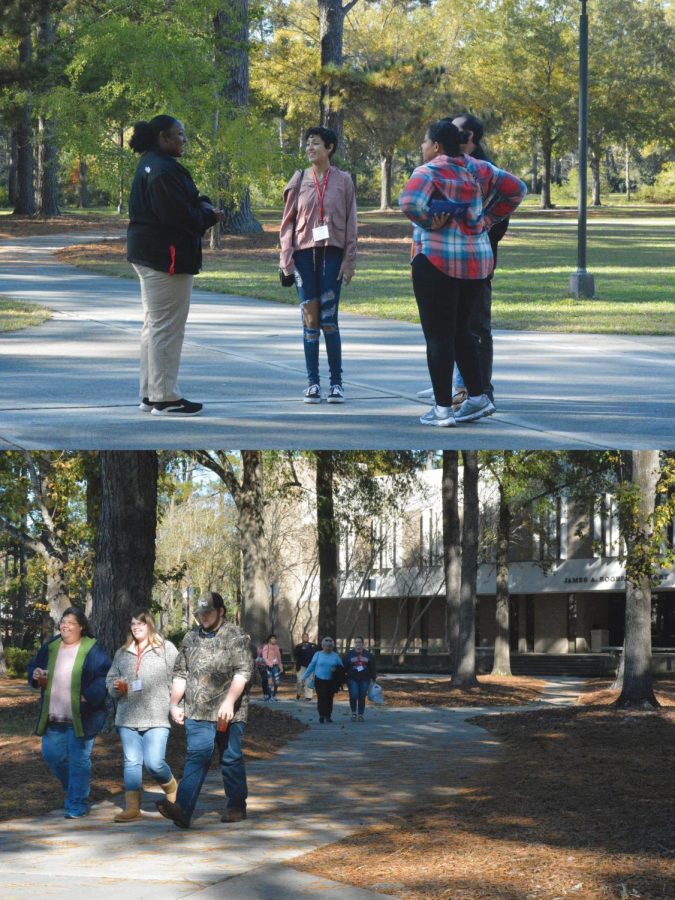 Prospective students toured FMU’s campus and learned about the university from faculty and students at FMU’s second open house of the fall semester on Nov. 10 from 9 a.m.- 2 p.m.

Potential FMU students and their parents first gathered in the Smith University Center (UC) to eat breakfast and obtain information about the university. As they walked in, FMU faculty and student volunteers gave them lanyards and IDs, pamphlets about FAFSA and financial aid and folders with general information about the university. Booths were set up around the UC to explain valuable resources for students, such as the Office of Counseling and Testing and the Office of Career Development. FMU’s mascot, Frank the Fox, also greeted the attendees.

After the initial meeting, the group went to a welcome session in the Chapman Auditorium of the McNair Science Building to gain general information about the university and its admissions process. Then, the group was split into smaller groups and volunteers led them to more specific events for subjects they may be interested.

Professors from each department were available as representatives to explain the opportunities available through the departments, meet potential new majors and help undecided students choose what they may want to do in the future. There were also lectures and panels for attendees to learn more about what takes place on campus, such as a student life panel and a panel for the Honors program.

Attendees were also given free rein to explore FMU’s campus. Information booths were set up around campus were volunteers guided attendees to the events they were looking for; the dorms so potential students could learn where they may soon be living or to the various dining spots on campus so the attendees could get lunch.

Maggie Dodge, a high school student interested in coming to FMU, attended the open house with her parents.

“It’s a smaller school,” Dodge said. “It has things I want to do but also things that I’ve considered. They also have a great soccer program.”

Dodge, who makes videos for the student news at her high school, said coming to the open house has allowed her to consider several opportunities she had not considered before.

“I went to the mass communication office, and that was something I’ve never considered before, and now it’s something I’m considering as a minor,” Dodge said.

Stacy Albertson, another prospective student, said she was considering attending FMU because of the relatively low cost.

“When you look at the other schools in the state, Francis Marion costs a lot less,” Albertson said. “Plus, I’d be getting scholarship money, so I wouldn’t have to worry about paying off student loans for years and years.”

Albertson said she valued the open house because it was an opportunity to learn about the campus she may one day be living on.

“If I’m going to be here for four years, I want to be able to learn my way around before I get here and get lost,” Albertson said.

FMU will hold its next open house on Dec. 1, as well as several others in the spring. Prospective students must register online on the admissions page of FMU’s website.