Students get inside look on production at WBTW 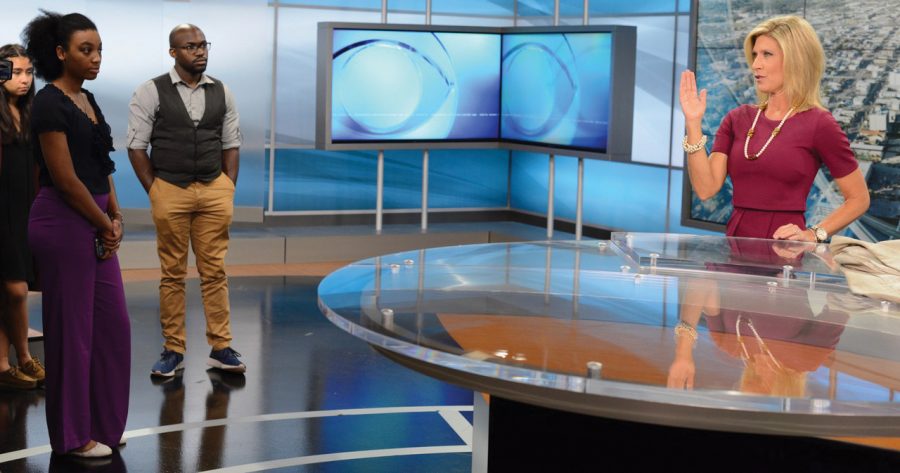 Contributed by the Department of Mass Communication

Several FMU students got to see the behind-the-scenes work that goes into production during their visit to WBTW News 13 on Oct. 12.

David Baxley, assistant professor of mass communication, took six students on a trip to the news station as a way for them to experience the process behind broadcast news production. The students were selected from Baxley’s broadcast classes.

“We usually go down to WBTW News 13 in Myrtle Beach, and this year I happened to be able to take my broadcast film production class as well as several students from my introduction to broadcast journalism class,” Baxley said. “I can get up and talk all day about broadcast journalism and things you need to know, but I think for a student to go down there and witness a newscast going on, that’s important to understand the whole aspect of broadcast journalism.”

Baxley said he teaches students about the different roles in broadcast journalism, but that until they are able to experience it in person, it doesn’t really make sense.

“We got greeted by Nicole Boone at the door,” Gilbertson said. “She gave us a tour of the studio where they actually record the newscast. We also went upstairs and got to meet the people who pretty much make it happen: the producer and director for the 5:00 and 5:30 newscast, and we also met both anchors, the weather person  and the other people who do news stories throughout the day.”

Gilbertson said everyone at WBTW was very friendly and willing to talk to them about their jobs and what they do. She also said Nicole Boone would talk to them throughout the newscast production, explaining what was going on.

“Nicole was probably my favorite person that we talked to while we were there,” Gilbertson said. “She was super friendly, and super cool. She treated everyone almost as if they were family.”

“I actually got to talk to the producer and the director of the newscast, and they told me that we as students at FMU actually have a lot of opportunities to do internships with WBTW because a lot of the people that they have recently graduated,” Gilbertson said. “They had a couple people that were 22, right out of college, and so we have the opportunity to go shadow different positions because they want more people from the area who know the area.”

Baxley said this trip was a good opportunity for students to see that there are more positions in broadcast journalism than just being in front of the camera.