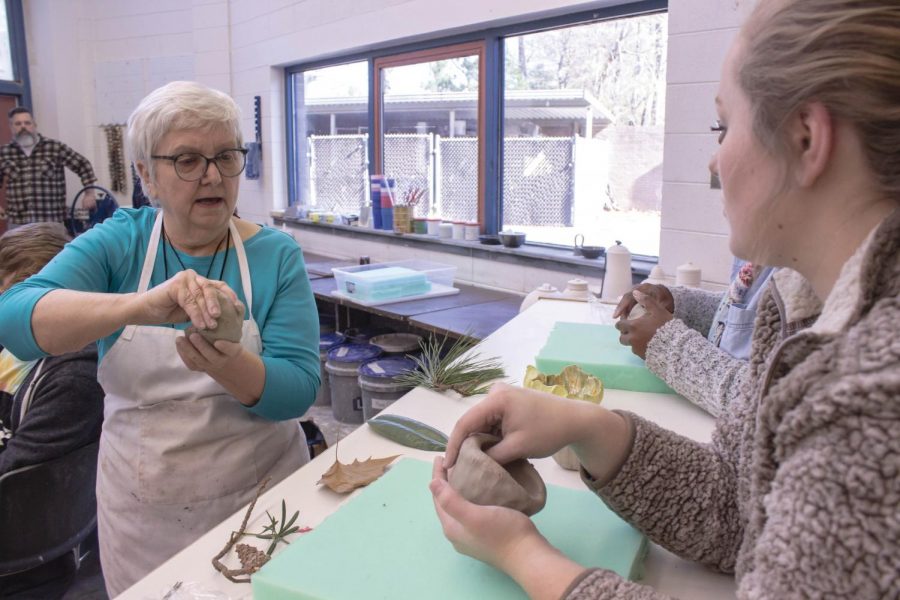 "Life is like a spiral," Ballard said. "You're always coming back to the people and places that are most important to you."

Alice Ballard is a painter and ceramic maker who is represented by five galleries. Ballard, the daughter of a service member in the U.S. Air Force, spent much of her childhood in various places around the world, but credits the time she spent in Paris as a pre-teen, where she often visited the Louvre and Vincent Van Gogh’s museum, as the defining time of her life.

Ballard’s hardships played a fundamental role in the creation of her work. One such work that she displayed was a pair of tulip pods beginning to bloom. Ballard’s mother, who died of lung cancer, gave tulip pods as a gift to her daughter. Ballard left these unattended in her studio, as she was preoccupied with her mother’s sickness, but returned one day to find that they had begun to sprout in the darkness, which she did not know was possible. This inspired her to turn her experience into art.

Similarly, Ballard turned one of her hardest experiences, the death of her first husband, into a work to help herself and others. Ballard’s husband died when his plane crashed on a routine business trip. Years later, she found herself teaching art to a group of sixth graders when the September 11 terrorist attacks took place. To help others cope with the pain that she had experienced before, Ballard created a series of tree totems. These totems have a burnt look at the bottom, but at the top, they are beginning to grow again.

“Some plants go through fire to open themselves,” Ballard said. “And I felt like I’d been through a fire.”

Ballard enjoys using her skills as an artist to teach others. She said she originally never planned to teach, but that she started teaching because she believed it would pay better than being an artist. She took a teaching job after her first husband’s death to be around other people, and said since then she has fallen in love with the profession.

“Students teach me all the time,” Ballard said. “Middle school students are my favorite because they’re risk takers. They’ll try anything.”

After Ballard’s presentation, students moved into an art studio to participate in a workshop led by Ballard, where she taught them how to make meditation bowls out of clay and use natural items such as pinecones or leaves to make art.

Ballard has remarried since her first husband’s death, marrying an architect who designed their current house out of an old ranch home. They are currently in the process of moving to Clover, South Carolina. Ballard’s work can be seen at the Blue Spiral Gallery in Asheville, North Carolina and the Renwick Gallery of the Smithsonian Museum of American Art in Washington, D.C. After her move to Clover is complete, Ballard will hold a series of workshops there, to which she encouraged FMU students attend.