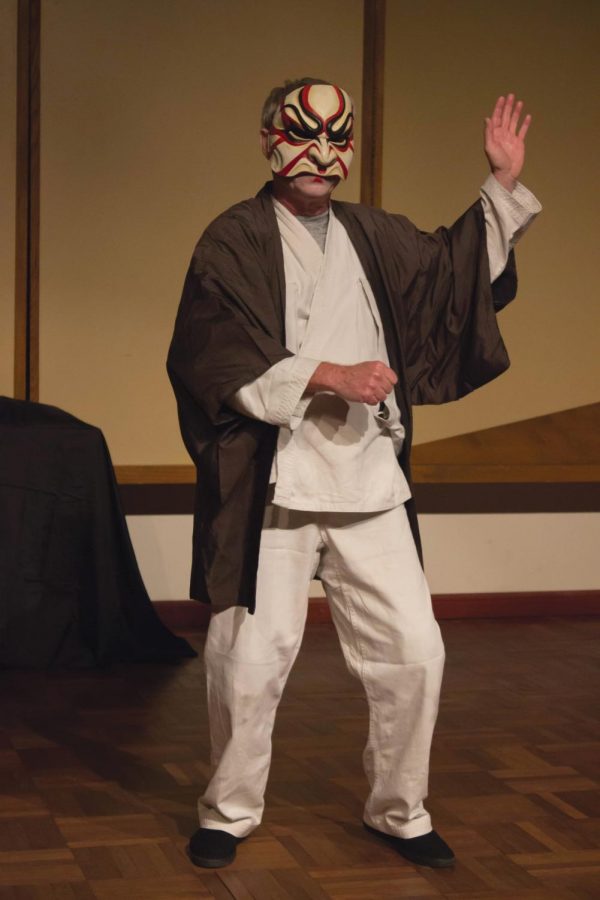 David Gaines as the villain in his modification of "Seven Samurai."

The show was an adaptation of the film “Seven Samurai,” which features seven samurai that must defend a town of farmers from bandits trying to steal their crops.

The movie lasts 3-and-a-half hours, but Gaines shortened the plot to fit into an hour. Rather than being a solemn epic, Gaines’ show is a slapstick comedy piece that he said is inspired by works like “Looney Tunes.”

Gaines played every character in the show, running back and forth to simulate a fight between bandits and samurai, but pausing periodically to cower in fear as a farmer.

The show was mostly wordless, and Gaines spoke only to give narration and vital exposition. Rather, Gaines used his training as a mime to tell the plot through exaggerated visuals and spoke made-up words to convey action. For example, he depicted a horse ride by galloping with his hands and muttering, “Bobbidy, bobbidy, bobbidy” to mimic the sound of a horse’s hooves.

Similarly, Gaines used no props except for two masks. Instead, he would draw out things using his hands, such as a house or a bow.

Gaines said he chose to use this style of comedy to differentiate himself from traditional mimes.

“The clichéd idea of mime is kind of precious and poopsy,” Gaines said. “It’s too pretty. Actually, all animated cartoons are mime, because there’s very little text in them. That’s the kind of mime this is.”

Gaines said the idea of the show came to him from an improvisational assignment at school that required him to tell the story of a movie with no words. He chose to perform his favorite movie, “Seven Samurai,” but since it would be unfeasible to perform improv for three hours, he chose the most important plot points and acted them out.

“Each of the seven samurai has to have a specialty, there has to be a fight scene and the good guys have to win,” Gaines said. “So you structure the thing on the high points of the movie, but you can fill it in with the fun stuff afterwards.”

Gaines also stressed that miming can increase a storyteller’s ability to tell a plot.

“Good physical performers are an interesting exercise in understanding how being specific in your gestures, motivation and the details of your plot really help the audience understand who you are and what’s going on,” Gaines said.

Robyn Morgan, coordinator of nursing student services at FMU, heard about the show because of her connections as a staff member. Morgan brought her daughter Hannah along, since she had watched some of Gaines’ performances online.

“I thought it was really good,” Morgan said. “It was very intense. It looked very difficult to play all of those characters.”

Hannah also enjoyed the show, taking some time to approach Gaines after the show to act out some of her favorite parts of the plot.

Gaines performs his show nationwide, and can be booked for a performance when he is not teaching at George Mason University or performing as a clown at the Children’s Medical Center in Washington, D.C.