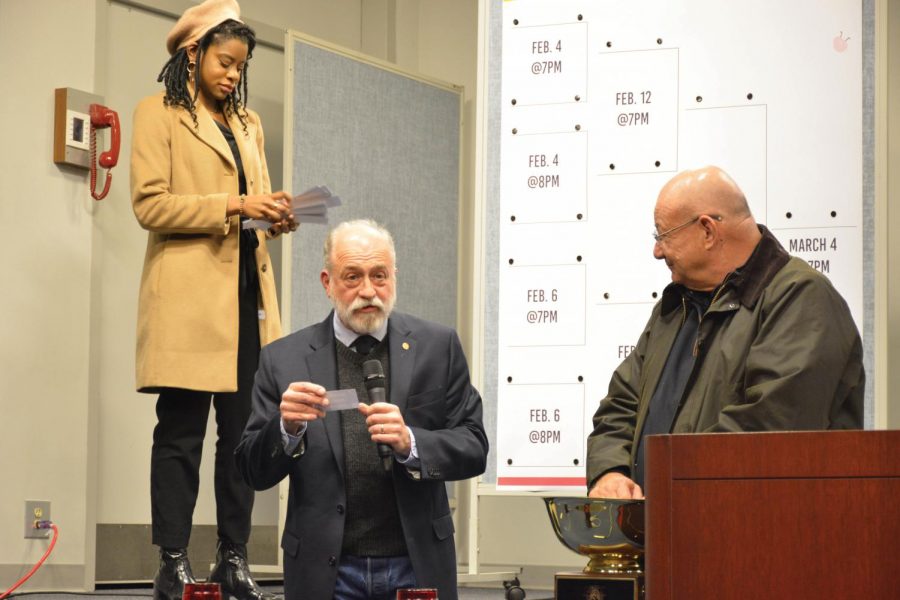 Thessalonia Thomas adds names to the bracket as President Carter draws the names and Mark Blackwell calls them out.

FMU hosted the opening of the second annual President’s Bowl on Jan. 31 at 7 p.m., and the first rounds of the competition on Feb. 4-6, in the Lowrimore auditorium inside the Cauthen Educational Media Center where students gathered to showcase their academic skills.

FMU President Luther F. Carter said the event is for students who want to compete on campus, but in an academic way.

The competition features 16 teams which are composed of at least three current undergraduate students, who competed against each other in a tournament-style bracket. The winners of each round will move on until only one team remains to claim the grand prize and the coveted President’s Bowl trophy. Players believed they would be competing for $1,000. However, Carter announced at the opening event that the winning team would now receive $2,000 and the runners up would receive $500.

Carter said the competition is tough and students will have to work hard to be the champions.

“People sometimes refer to this as a ‘trivial trivia game,’” Carter said. “There is nothing trivial about the nature of the questions here. They’re tough questions; they’re rigorous questions.”

A panel of judges oversees each round. These judges determine if a team’s answer is worth points when a student should be prompted to elaborate on their answer and make sure the audience is not whispering answers to contestants.

The second set of rounds began the next day, with The OG’s from the school of business beating the FMU Education Club on the last bonus question of the round, ending with a score of 110-105. The Physics and Engineering team beat the FMU Honors team 160-140.

“I came to support the organizations on campus,” Parra said. “The school of business specifically. I’m an RA as well so I wanted to support them. It was also good to see friends.”

Parra also said the quiz bowl was a great way to spend time with friends on campus and that he was excited to see how each team will do.

“I’m looking forward to seeing what people know,” Parra said. “Seeing how people will react when they are asked off-the-wall kinds of questions that they are not exactly sure how to answer.”

FMU will hold the semifinals of the President’s Bowl on Feb. 26. After this, the final two teams will compete on March 4. Both events will be televised and begin at 7 p.m. in the Lowrimore Auditorium inside of the Cauthen Educational Media Center.