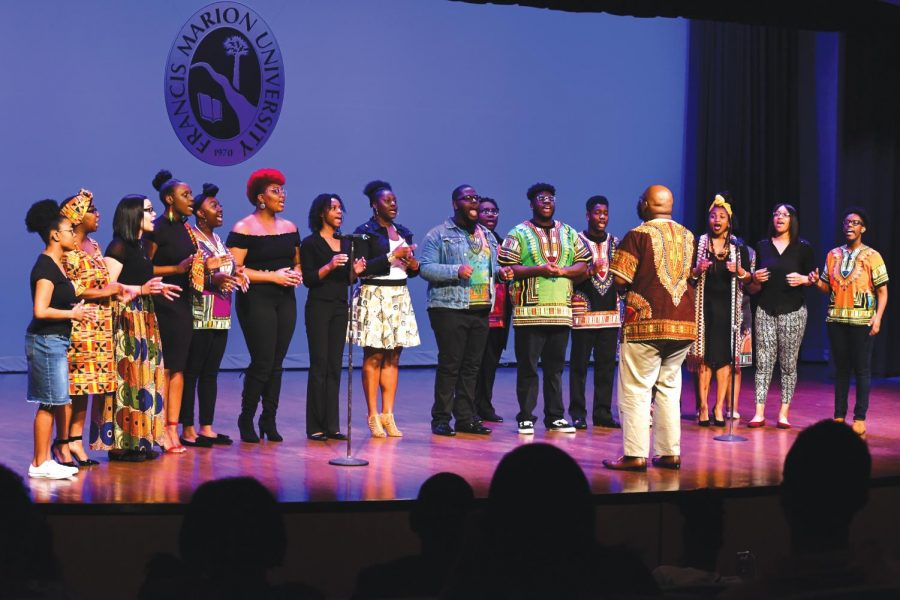 The Young, Gifted and Blessed choir sings at the Black Heritage program.

FMU hosted its annual Black Heritage Month celebration at 5:30 p.m. on Feb. 5 in Chapman Auditorium of the McNair Science Building to celebrate black history and culture.

The African American Faculty & Staff Coalition, Campus Activities Board (CAB) and The Division of Student Affairs organized the event.

Eric Squirewell Jr. and Caira Wilson of CAB opened the event and introduced each performer and the guest speaker. The event included several performances and speakers, including an opening musical selection by the FMU University Concert Choir and Voice Collective (Voice Collective).

A Swahili musical selection by the Young, Gifted and Blessed gospel choir followed the Voice Collective. Senior Rischard Brown, a psychology major, presented a spoken word piece, followed by a dance performance by the Praise in Motion dance ministry.

The Dean of Rogers Library, Demetra Pearson, introduced the event’s main guest speaker, Dori Sanders. An award-winning novelist, Sanders spoke about her personal life and writing journey. She concluded by opening the floor to questions from the audience.

“I thought this would be the perfect opportunity to share the gift that God has given me,” Brown said. “Encouraging hearts and minds to remember where we came from and what has gotten us this far.”

Brown said he was excited that so many people showed an interest in the event.

“Honestly, I didn’t have any fears with participating in this event,” Brown said. “I was touched to see that there are still individuals that are eager to learn about the past so that we can carry their motives in the future.  FMU student Chandler Holmes attended the event as a part of the Voice Collective.

“I had never been to a history gathering like that, but the Black History Month meeting was really cool,” Holmes said. “I learned a lot more about culture than I would’ve ever learned elsewhere. It’s super important to keep having programs like this to broaden people’s views. More people should go enjoy what cultures have to offer.”