FMU’s Got Talent heads toward the final round 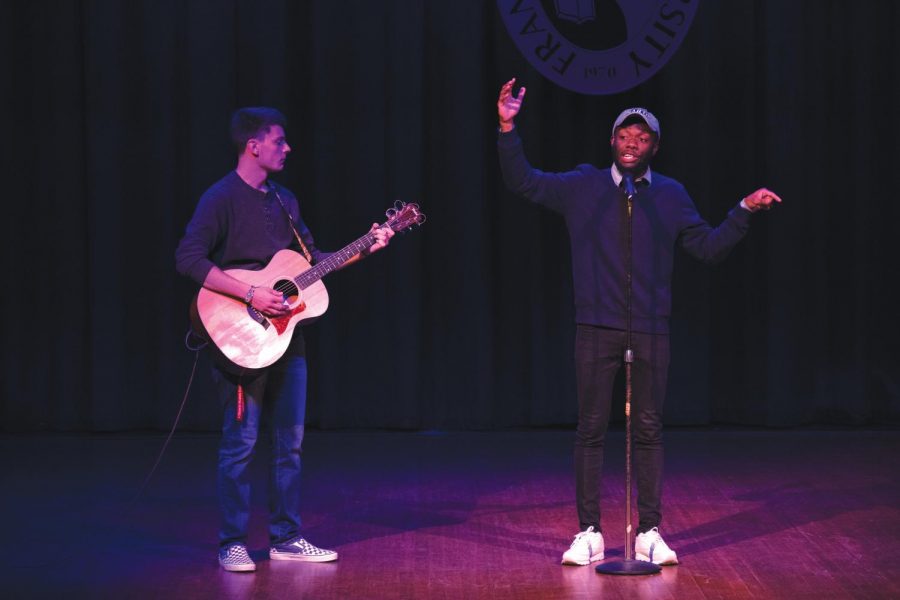 FMU’s  Campus Activities Board (CAB) hosted the third event of FMU’s Got Talent from 7-9 p.m. on Jan. 23 in Chapman Auditorium in the McNair Science Building.

While CAB has been active with other events, this four-part event has taken a lot of work to arrange, according to Caroline Shelly, executive chair of CAB.

Shelly said preparations for FMU’s Got Talent started in the summer of 2018 during a board meeting and planning has not stopped since.

The competition welcomes a wide variety of acts, one of which was performed by senior Rischard Brown. In addition to his spoken word piece, he transitioned from having only an acoustic guitar to accompany his words to a four-piece band.

“I will be performing a piece I wrote called ‘Authentic Confessions,’” Brown said, before the show. “Basically, it’s just confessions that I don’t speak about to myself, just confessions that I had to make with God. I want people to allow themselves to understand how important it is to just admit that we are weak. I just want everyone to go to a different setting, not just hearing with your ears but feeling with your heart.”

For this round, the program switched hosts. Alumni Kj Dojer, one of the new hosts, said he joined because he likes to be in front of people.

Dojer graduated from FMU in the spring of 2018 and was well known around campus because of his Greek life status as well as having a fun-loving personality. He also said he wanted to participate because he thought the first two shows were enjoyable.

Shelly said she was glad to see how well the event has been received.

Along with changing acts and hosts, Shelly said CAB also has plans to make changes to their final round of the event.

“At our finale we are going down from 10 contestants to six,” Shelley said. “The final six will get to perform at our Performing Arts Center in downtown Florence. We will start at seven and have a headliner perform during intermission. Also, this time we will be doing live voting so that we can announce the winner at the end of the show,” said Shelly.

The first 400 students will get in for free and general admission will be $10. Tickets will be set aside for family and friends. The finale of the four-part event will take place at 7 p.m. on Feb. 20 at the PAC.