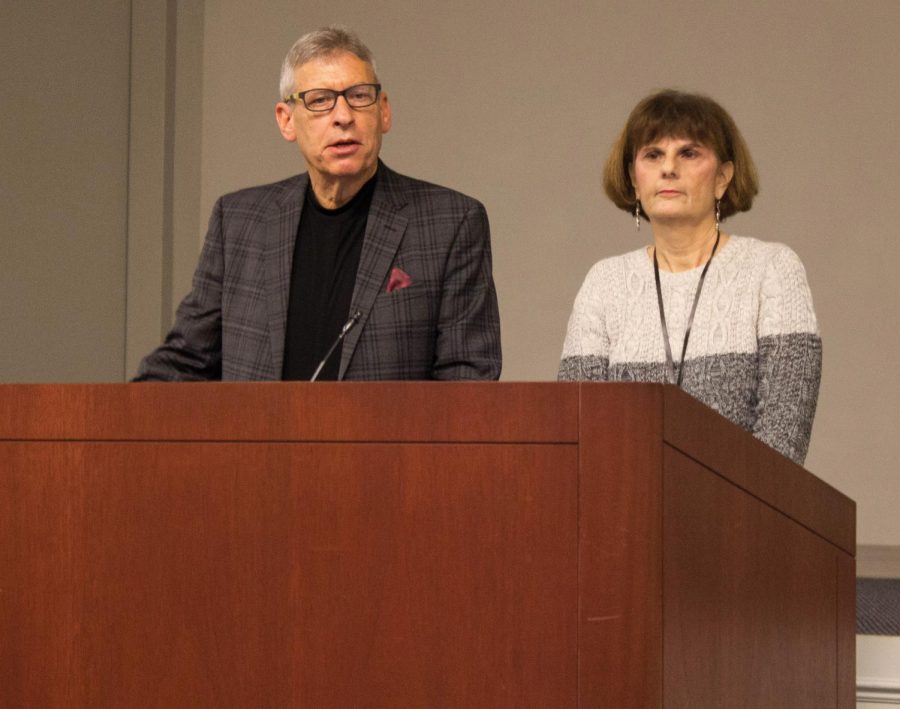 Henry and Minda Miller remember victims of the Holocaust.

The son of two Holocaust survivors, Henry Miller, and his wife, Minda, spoke to students on Jan. 24 as part of FMU’s International Holocaust Remembrance Day program, sponsored by the Campus Activities Board (CAB).

Miller told the stories of his parents as a way to remember the victims of the Holocaust, the systematic killing of more than six million Jewish people and millions of other innocents in Europe during World War II.

Miller said the goal of his talk was not to gain sympathy for himself or vilify those of German and Polish heritage, but rather to remind people about the consequences of being apathetic to wrongdoing.

“We all know what can occur in a sophisticated society such as Europe,” Miller said. “What starts out as a goal to develop a superior race becomes an excuse to murder and eventually render an entire German society as an accomplice to genocide.”

Miller said his mother, Cela, was 18 when World War II started, and her siblings, parents, uncles and aunts were killed in the following years. The last time Cela saw her mother was when she and her sister, Bluma, ran into the forest after Nazis discovered where they were hiding. Miller also said he has never seen a picture of his grandparents, which he used to demonstrate that survivors of the Holocaust often didn’t have homes to return to.

Cela was put into a Nazi work camp after she and Bluma were discovered hiding with their uncle. The sisters were transferred to several different camps, but each had a constant at each camp: the inhabitants were overworked and underfed. At one camp, there was so little food that even the guards did not have enough to eat.

“Inmates were little more than skeletons,” Miller said. “Bluma had typhus and Cela had contracted typhoid fever. Each weighed about 70 pounds.”

American soldiers rescued Cela and Bluma and put them in a displaced person’s camp, a makeshift hospital for people rescued from concentration camps.

Miller’s father, David, had a similar experience. He turned 18 the same month that the war started.  David was born in Warsaw, Poland, which was home to the largest Jewish community in Europe. German soldiers forced David and other Jews into a ghetto in Warsaw shortly after the war began.

Three years later, the residents of the Warsaw Ghetto staged an uprising, during which David escaped the ghetto by sneaking out through the sewers. However, within weeks, Nazi soldiers captured him and sent him to Auschwitz, a concentration camp. He was forced to work in a coal mine there because of his age and strength.

American soldiers liberated David and his best friend, Felix, at the end of the war. They took them to the same displaced worker’s camp that Cela and Bluma had been taken to. It was there that David and Cela met, and Felix and Bluma fell in love.

After David and Cela got married, they moved to the United States after being sponsored by Beth Shalom Synagogue in Columbia, South Carolina. David and Cela were one of four couples that the synagogue sponsored.

“I believe there was virtually nothing that they could not overcome in America because they had just experienced the most horrific five years that could ever be imagined,” Miller said.

After telling his parents’ stories, Miller introduced his wife Minda, chair of the Selden K. Smith Foundation for Holocaust Education, a foundation that provides funding for Holocaust education in South Carolina.

While Henry focused on remembering victims of the Holocaust, Minda focused on education and a warning that the world can never let such an event happen again.

She explained the political and economic situation in Germany, saying that previous depressions made it easy for Adolf Hitler to stir up hate in Germans that wanted change. Minda said the inaction of German citizens and the international community until it was too late serves as a warning sign for when we see hatred today.

“We all tell ourselves that we are only one person and that we cannot make a difference,” Minda said. “This is an absolutely false ideology.”

Minda said she hopes everyone will honor survivors by educating themselves on the Holocaust. She said she was worried about a 2018 poll that said two-thirds of millennials could not describe what Auschwitz was.

After the event, CAB members handed out educational material on the Holocaust, explaining what it was, honoring the survivors and showcasing museums in the state that teach about it.