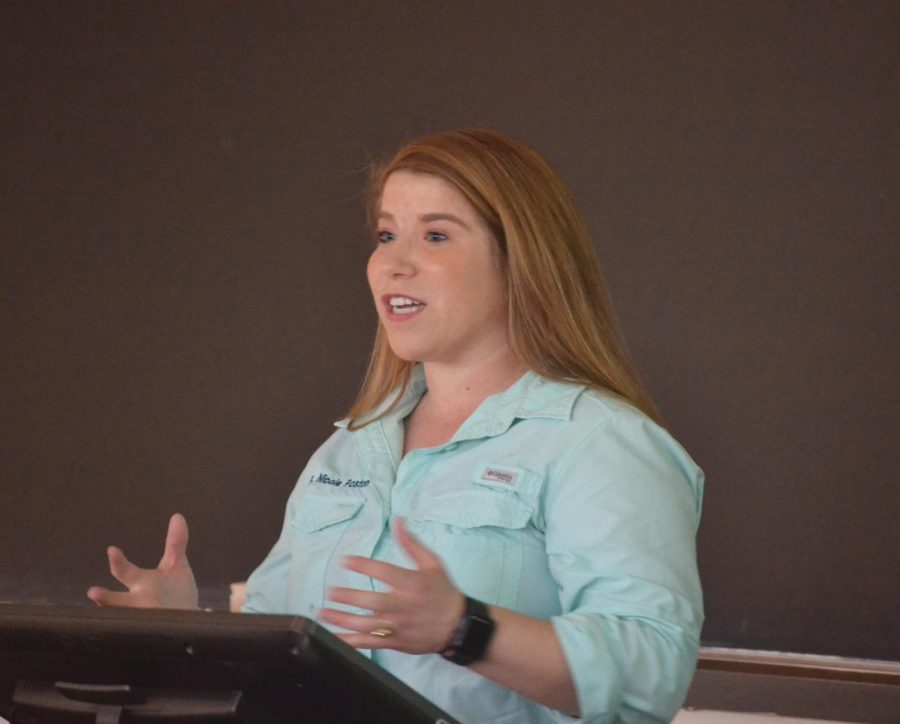 Nicole Poston, a veterinarian and former FMU student, spoke to members of the Pre-Vet Club and American Chemical Society on Feb. 7 to talk about her experiences as a vet and explain how students can get into the profession.

Poston, a vet at Kingstree Animal Hospital, said she wanted to be a vet for as long as she could remember. Ever since she was young, she had a goal to help animals and said she loved the challenges that science and math presented her with. She also said her field has numerous opportunities.

“We treat every species,” Poston said. “It’s a very diverse field. You have an open door to any path you choose.”

Poston received her Doctor of Veterinary Medicine degree from Mississippi State University. The school gave her one of five seats as a S.C. student, meaning that the state of South Carolina paid part of her tuition so she would only have to pay in-state tuition.

Poston said her biggest piece of advice to students would be to take their course work seriously.

“It doesn’t matter if you’ve got an A,” Poston said. “You need to understand the material. When you get out into the world, you’ll be accountable.”

She said students must be prepared to always keep learning after they graduate, or they won’t be qualified for the job.

She also stressed the importance of planning for veterinary school ahead of time. She said academically, grades are important, but that is also important to be involved on campus. She told the story of a friend who had a nearly perfect GPA, but was rejected due to their lack of involvement. She explained that universities want to see a student’s ability to handle multiple tasks at once, since students will be given a greater volume of work in vet school.

She also said it was important to do work outside of school to get noticed. She said vet schools like to see students who have volunteered their free time to help animals. They also like to see pet ownership and a background with animal shelters.

Poston said it is critical for people in the veterinary field to never stop working and learning, because there is a level of trust expected of them by their patients. She said communication is critical for a vet, and that honesty and compassion are some of the most important parts of the job.

Poston explained why she believes a vet’s work is important by sharing a story from when she went to Haiti, a country that at the time had only two veterinarians.

“Here, we take it for granted,” Poston said. “You don’t hear about rabies much here, but in Haiti, people are dying left and right from rabies.”

Poston said her work also excites her because she has a chance to help people as well as animals. She recalled a time in which she had to put down a little girl’s sick horse. The girl came to Poston with tears in her eyes, so Poston carried her and walked around the farm with her.

“At the end of the day, you’re helping animals, but you’re also helping people,” Poston said. “For every pet’s face, there’s a person associated with that.”

Poston encouraged students interested in veterinary school to visit her at Kingstree Animal Hospital, and said the hospital welcomes them to shadow vets or watch surgeries.