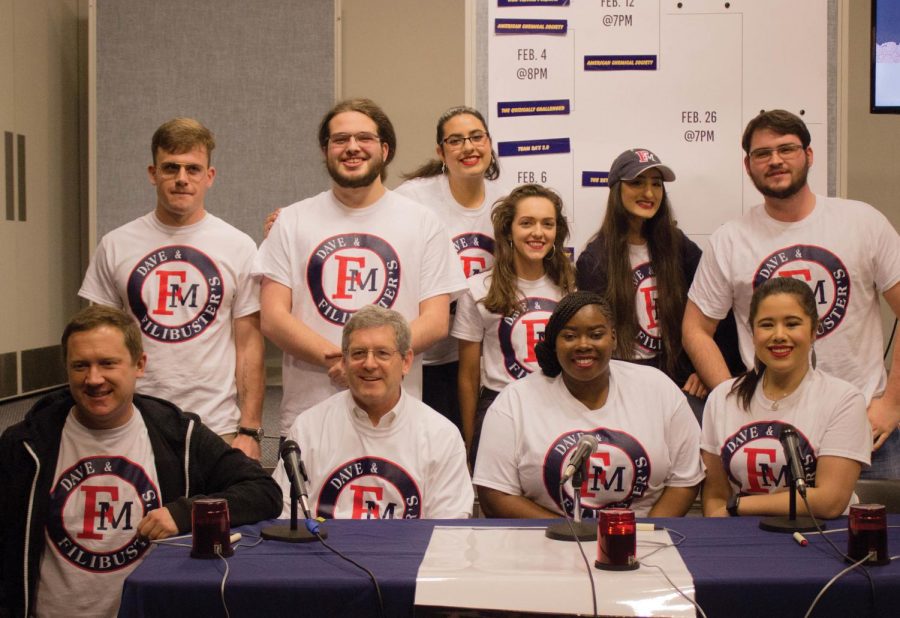 Members and supporters of Dave and Filibuster's celebrate after their win on Feb. 11.

Students continued to compete in the President’s Bowl, FMU’s academic quiz bowl, on Feb. 11-13 in the Lowrimore Auditorium inside the Cauthen Educational Media Center (CEMC).

The next round began the following day with the American Chemical Society beating Non-Trivial Pursuits, a group of math students, 285-225. Students from the Baptist Collegiate Ministry (BCM) then beat The Returning Champs, a group of physics students, 175-145.

On Wednesday, Phi Alpha Theta beat the Physics and Engineering Team 450-125, the highest scoring match of the President’s Bowl so far. Dave and Filibuster’s then returned to beat the OG’s from the School of Business 195-140.

Hailey Reed, a competitor for BCM, said she competed for the Honors team last year, but that she wanted BCM to have their own team this year. She said when she competes, she tries to not focus about being on stage, but rather on answering the questions and answering them quickly.

“There’s a lot more pressure on stage,” Reed said. “In the audience, it’s easy to sit there and say we should have gotten it right, but it’s just harder up there.”

Reed also said she’s excited that her team made it to the semifinals.

“No one really expected us to go far because we weren’t an academic organization,” Reed said. “I think we should be really proud to have played as well as we did so far.”

Sam George, a member of Dave and Filibuster’s, said he feels comfortable competing in the quiz bowl because he did academic challenges in high school. He also said being on stage is an entirely different experience than being in the audience.

“In the audience, you can get angry; you can shake your leg when they don’t get it right,” George said. “You can have a little meltdown, but you can’t do that up on stage.”

Shahana Mushtaq said she attended the President’s Bowl to cheer on her friends on Dave and Filibuster’s.  She said it was particularly frustrating when the first match went into overtime.

“It’s frustrating when you’re tied and your best friends are answering the questions and they’re either going to get it right or you drop the whole friendship,” Mushtaq said. “But they are my best friends. I love them; I support them. It’s a great feeling when my team does win.”

Mushtaq said she’s excited her friends made it to the semifinals, and that she was going to make posters and pom-poms for the next round.

The semifinals for the President’s Bowl will take place on Feb. 25 and 26. The final round will be held on March 4 at 7 p.m. in CEMC’s Lowrimore Auditorium.