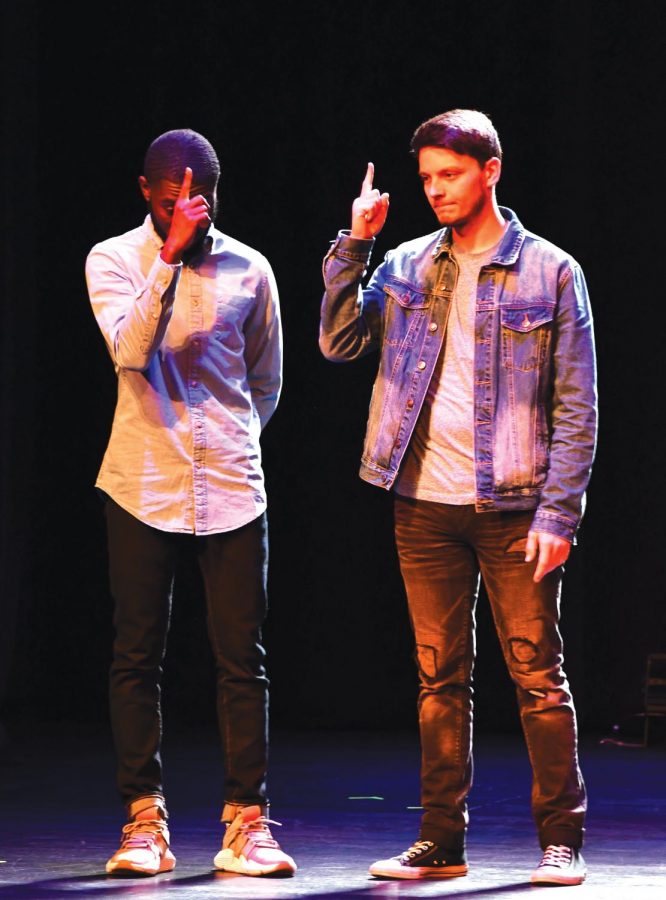 Rischard Brown and Christian Holloman took home $500 after winning the finale of FMU’s Got Talent on Feb. 20 at 7 p.m. in the Performing Arts Center.

Brown performed his original spoken-word piece “Zig-Zag” as Holloman accompanied him on the guitar, along with a band. Brown said he was grateful about being awarded first place.

“I feel great,” Brown said. “This was an amazing opportunity. I’m just glad we were all able to showcase our talent. We were really just trying to find something that we could use to encourage somebody to just have fun and do something different every time.”

Brown said the collaboration between Holloman and himself started as a one-time thing, but grew into more.

“Tonight was a great experience,” Holloman said. “It is hard to state how I feel about it now, but when I look back on it, it was a great night.”

FMU’s Campus Activities Board (CAB) hosted the event. Caroline Shelley, the executive chair of CAB, said she was pleased with how FMU’s Got Talent has gone.

“I thought tonight was a great success,” Shelley said. “Everything went well and I am extremely proud of all of our contestants.”

Shelley also explained how the finale of the series compared to the other three rounds.

“It was a completely different world hosting it here,” Shelley said. “Previously, it has been hosted in Chapman Auditorium and has been really low key. We still had a ton of students come out. This one took a lot more planning and a lot more choreographing, but it was great to give them all the chance to perform on the big stage.”

Brown and Holloman were the first finalists to perform. Tasia Phillips performed next with her rendition of “Listen” by Beyoncé. Next, 2 Live did an original hip-hop dance performance. After the first three performances, the candidates for FMU Homecoming Court took the stage and explained why they should be voted Homecoming King or Queen.

After the Homecoming Court candidates finished speaking, Jhameeka Mccullum performed an original rap routine, although she was not a finalist. After her performance, the next finalist to perform was Rian Avin. She performed “If I Ain’t Got You” by Alica Keys. After Avin, Donzell Bailey played the piano while others sang and danced. The last finalist to perform was Charday Sparks who sang “Stay with Me” by Sam Smith.

As CAB counted the ballots from the live audience, Alex Ahn, a musician from Atlanta, Georgia, performed. He performed a unique spin on the violin by playing contemporary hip-hop and EDM. After Ahn’s performance, members of CAB, announced the winners. Charday Sparks won second place and Donzell Bailey won third place.