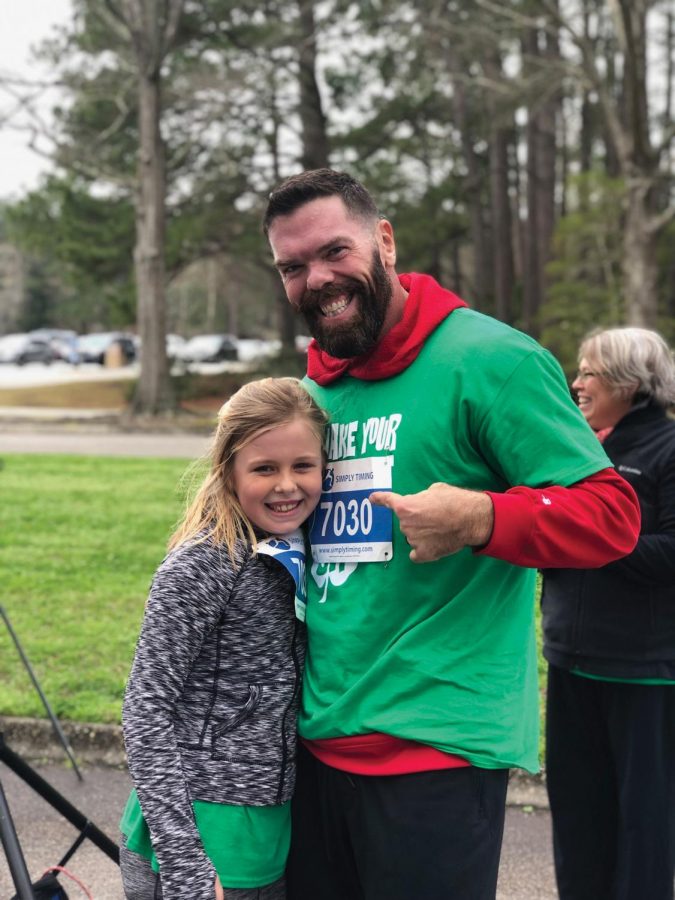 Brian Edwards, one of the winners of the 5K, poses with his daughter, Vivian Edwards.

The FMU Swim Club hosted its first Shake Your Shamrock 5K from 10:30 a.m.–12:30 p.m. on March 2 behind the Smith University Center (UC) to raise money for the Florence Area Humane Society.

The course took runners around the field behind the UC and around the track field. The finish line was placed on Alumni Drive in front of the UC. At the time, FMU was hosting an open house, allowing visitors to observe FMU in action.

Sophomore Kelsey Ioffreda organized the race as the president of the FMU Swim Club. She said she originally thought of doing a triathlon, but because the Swim Club is so new, they decided a 5K would be a better place to start.

“The idea of having a race as a fundraiser is because when I was on the swim team in the past, I always used running as a part of conditioning for meets to keep my cardio up,” Ioffreda said. “Races are also a good way to get students out and active, and to meet other like-minded athletic people.”

Ioffreda also said these events help foster a sense of community on campus among students and faculty.

“My favorite part of these types of events is seeing the communities on campus come out and connect because it’s nice to be reminded that FMU is more than just a school,” Ioffreda said. “It is a community and a family that gets out to have a good time and make a difference in each other’s lives.”

Gary Hayes is a local runner who frequently runs races that support a cause he believes in.

“I saw this race being advertised online and my wife got her master’s here at FMU, so we both decided to come out and support the students,” Hayes said. “I like seeing students get involved in things that keep them active.”

Annabelle Perner, FMU German exchange student and member of the Swim Club, said she has always used running to improve her swimming ability.

“I missed swimming on a team like I had in the past so I was very happy to become a part of this one because it is nice to have a community and people to push you forward,” Perner said.