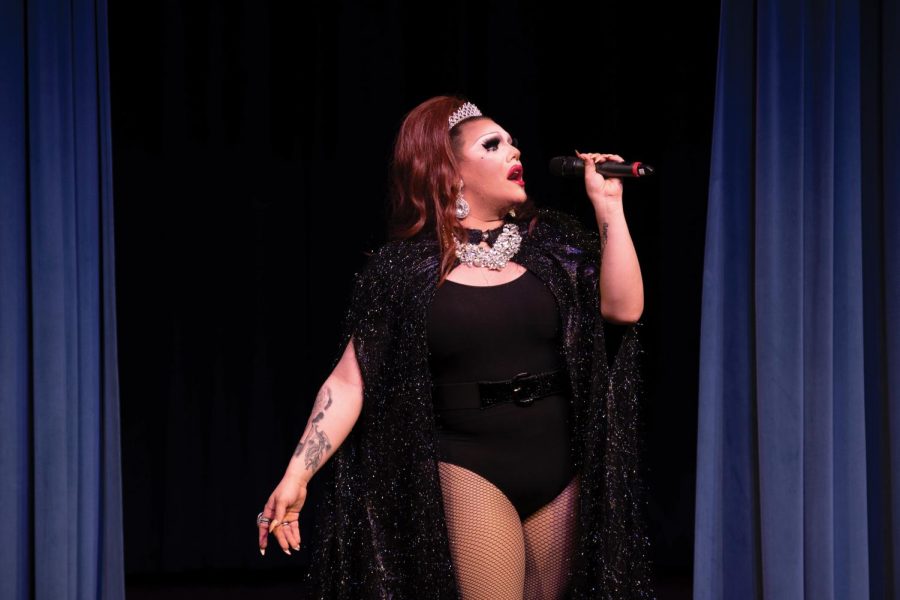 Judy Simmons performs for students at the Chapman Auditorium for Pride Month.

FMU’s Gender-Sexuality Alliance and Student Government Association teamed up to present their third annual drag show yesterday from 7-9:30 p.m. at the Chapman Auditorium of the McNair Science Building in celebration of pride month.

The event attracted a full house and was hosted by drag performer Patti O’Furniture, who opened with a few jokes and the first performance of the night, dancing to “Celebration” by Kool and The Gang and mingling with the audience.

O’Furniture said she has participated in drag events at FMU for the past few years, but this year FMU wanted to do a full-blown drag show. They also wanted to emphasize the importance of protecting against STDs.

The show also included performances by four other drag queens: Anaya DeVore, Veronica La Blank, Breonna Jenae and Judy Simmons. The performers came onto the stage one-by-one and performed a short set of about two songs each, where they were encouraged to leave the stage and participate with the audience members who were offering dollar bills.

Many drag performers lip sync to their songs; however, Simmons sang all of her songs.

Halfway through the show, there was a short intermission where O’Furniture opened the floor for a few minutes to questions about drag, including how she got involved.

“I was dared to do it by my students,” O’Furniture said. “I worked at the University of South Carolina in Columbia, and we were getting ready to put on a drag show there. Motivating students can sometimes be a challenge. So I went to my students and said ‘Hey, you guys need to raise $500 to put the show on.’ So I told them, ‘Look, if you raise the money, I’ll put drag on and be part of the show.’ The next week they had the money.”

After the short intermission, each of the queens came back out to do another set. During this time, La Blank did an emotional performance where she changed on stage out of her drag costume and into normal masculine street clothes to the song “Iris” by the Goo Goo Dolls On her chest, written in makeup was the word “faggot,” which she removed with makeup remover to symbolize that underneath it all, there is still a person who has feelings and emotions.

After the show, O’Furniture opened the floor to questions from the audience that could be directed toward any of the five performers.