Told to 'savor every moment' of ceremony 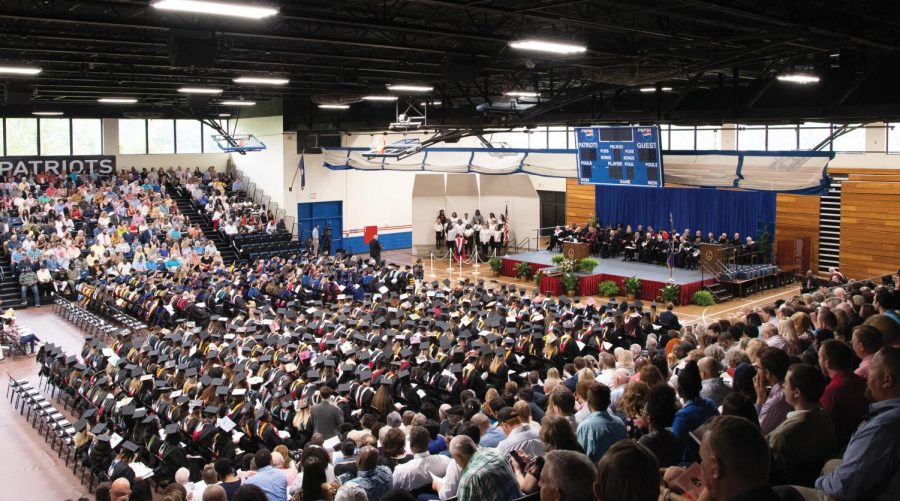 More than 300 graduates and 3,000 family members and friends gathered on May 4 at 10 a.m. in the Smith University Center for FMU’s annual Spring commencement ceremony, marking an end to a chapter and the beginning of a new one.

Of the 308 degrees presented, there were 290 baccalaureate, and 18 master’s and specialist degrees, 3 of which were honorary. Among the graduating class, 68 received honors; 59 of which were Latin honors and 9 were university honors.

“What all of you share in common this morning, is that you worked hard for the privilege of walking across this stage,” Carter said. “All of you are fully deserving in the respect and admiration that these degrees will earn you now, and throughout the remainder of your life.”

Carter told the graduates that while this is an exciting moment, they should not rush it and instead savor every second.

“The problem with commencement mornings is that they are always a ‘hurry up and rush’ morning,” Carter said. “But this is one of the rare times in your life when you’ll want to savor every single second. You don’t know this now, but you will in decades to come. You will remember this event forever.”

Carter also congratulated students on their hard work, but reminded them that their degrees were much more than that.

“The degree itself is simply a symbolic manifestation, although a very important one,” Carter said. “The true cause for celebration today is the change that has occurred in each of you over the past few years. You’ve become more inquisitive; you’ve become more analytical, more reflective and yes, more articulate.”

Gilda Cobb-Hunter, member of the S.C. House of Representatives and honorary degree recipient, was the key-note speaker for the morning and emphasized the importance of institutions like FMU.

“I take pride in saying that Francis Marion, every year, graduates a significant percentage, 30 percent to 40 percent of first-generation students,” Cobb-Hunter said. “That is major, and certainly a very special and deeply personal accomplishment for many families.”

Cobb-Hunter also congratulated students on their accomplishments and pointed them toward thinking about their futures.

“I am sure the future is very much on your minds now,” Cobb-Hunter said. “Maybe you are thinking about a new career or new approach to the career you already have. Maybe it’s ‘Lord please let me be able to get a job after all this time and effort.’”

She also told graduates that she understands why they look forward to the future, but that events like this are better when you look at where you’ve come from.

“Ceremonies like this are best viewed looking back over one shoulder,” Cobb-Hunter said. “Right now, graduates, you are probably a little too close to this graduation ceremony to see it for what it’s worth.”

In closing remarks, Cobb-Hunter said she hoped the students appreciate the time they spent at FMU.

“I am sure all of you hope to be somebody,” Cobb-Hunter said. “Reaching this ceremony proves that.”    Graduates were then presented with degrees and the graduating class of 2019 left to go out into the world.