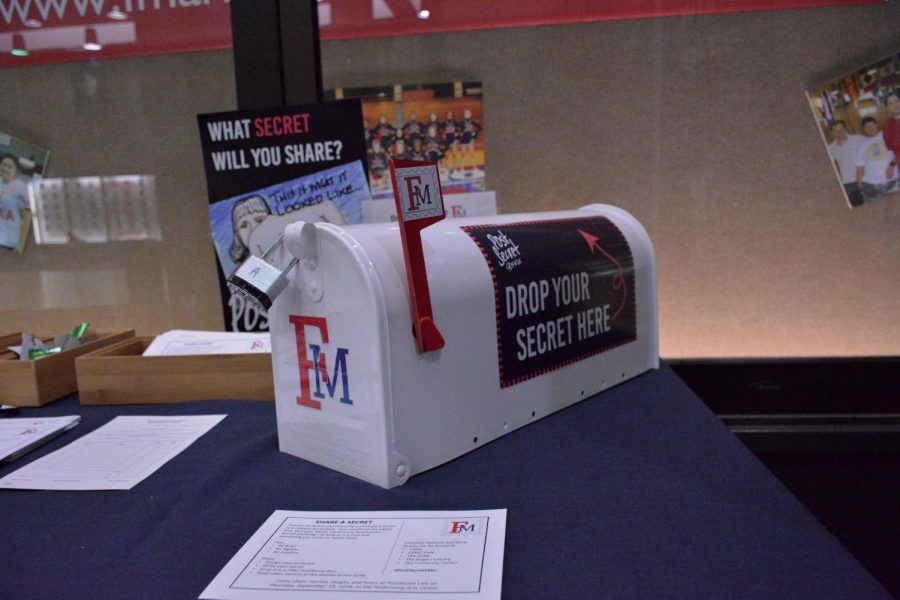 A secure mailbox sits on a table ready for secrets to be submitted.

FMU students and faculty will learn anonymous secrets from their peers on Thursday Sept. 19 at 7:45 p.m. in the Performing Arts Center (PAC) where Frank Warren will present part of his “Post Secret” challenge that has captured attention from around the world.

“Post Secret” is a social experiment that Frank Warren started around 15 years ago in February of 2005. It quickly turned into a cultural phenomenon when millions of people from all over the world agreed to anonymously send their secrets to Warren, whom they had never met.

While Warren has since found the project to be meaningful, it was originally started as a way to pass the time.

“I think there are a number of reasons I started the project; some that I’m aware of and some that I will probably never be aware of,” Warren said. “I had a pretty boring job at the time, so I was looking for something more fun and creative to do in my free time. So, ‘Post Secret’ almost started as a prank. But, very soon it became really meaningful once I saw the soulfulness and the gravity of some of the secrets, and it’s just taken me on this amazing journey.”

Warren said that since the takeoff of the project, there has been a huge reaction to it that he did not originally anticipate. People from all over the world have connected over anonymous secrets, some of which are filled with pain and anguish.

“When I saw how amazing the secrets were that I was receiving, I knew it would be special for me,” Warren said. “And then when I started putting the website together, and posting secrets every week, I hoped other people would appreciate it as much as I did. And it tuns out they did; not just from across the country but from around the world. The website has had over 820 million hits. It’s the most visited advertisement-free blog in the world and it keeps getting bigger every day.”

According to Warren the “Post Secret” project has helped many people from around the world express their secrets in a safe environment and find out a little bit more about their inner selves. He said sometimes we have secrets that we don’t even realize we have until we feel safe to reveal them.

“I realized that maybe part of the real reason I started ‘Post Secret’ was because I was keeping secrets from myself,” Warren said. “I, just as much as everyone who is sharing their secrets with me, needed this special place where I could find the courage to be vulnerable and out my own stories.”

Warren also said his original interest in the project stemmed from a long-time intrigue of postcards.

“I’ve always had this interesting relationship with postcards,” Warren said. “I’ve always thought they were kind of magical. I’ve wondered at times if you were to write a postcard to your future self or past self, what would you put on it? Would you be the same person when you read it as when you write it?”

FMU reached out to Warren hoping to bring a place for students to talk about their secrets and help with mental health and suicide awareness.

Matthew Turner, associate professor of philosophy and coordinator of the philosophy and religious studies program, said the planning process has taken place for about a year.

“Since he’s been doing this, he’s sort of turned his project into a mental health awareness program,” Turner said. “So, we brought him here to Francis Marion to do that here where people can write their own secrets and share and post those. Also, so that he can share his experience from while he’s been doing this.”