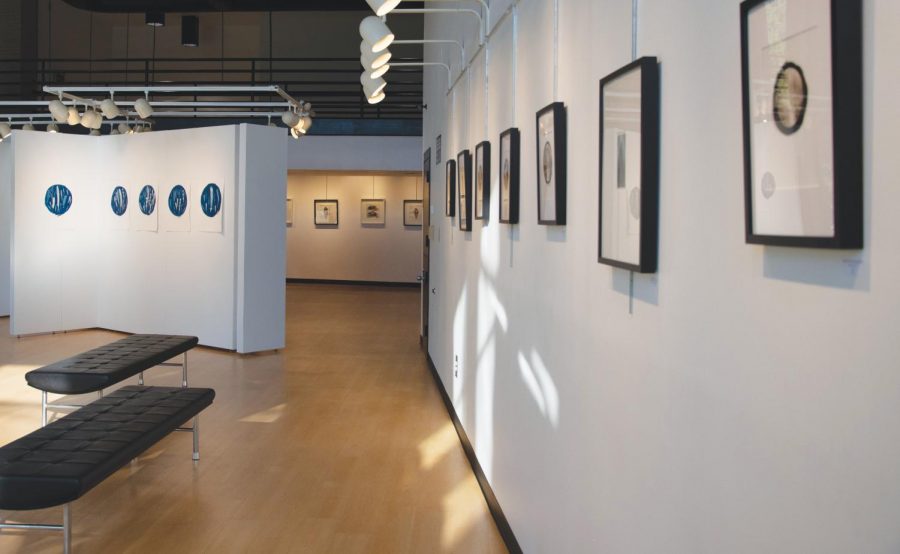 According to Schorr, nostalgia and nature are closely woven together in how she makes her pieces, and this is an ongoing series that will always continue and evolve.

“I love historical photo processes where I am able to hand mix and hand-apply my own emulsion – like the cyanotype process and the palladium process,” Schorr said. “The cyanotype process is the most accessible and I make all my prints in my own backyard – or on the river, or on the beach. Photogravure is my absolute favorite photographic process, where an image is actually etched as a negative onto a copper plate, then through a printmaking process, the plate is inked and run through a press onto paper or, what I like to use, maps. These images are rich in detail and very labor-intensive to create. I have always liked using my hands and thinking of new ways to mix photographic processes or use nature – like hand stitching my images onto the magnolia leaves or inlaying images with resin into the seashells.”

Schorr said she began working on these pieces when she moved to Charlotte from New York in 2010 and that their themes and motifs came together during that time.

“The first pieces were the magnolia leaf pieces, which then evolved into self-portraits onto the magnolia leaves, then later became the leaves placed onto my father’s nautical maps, which we used together when we would go shark fishing on our old Hatteras, “the Hurricane,” Schorr said. “The magnolia trees were my first favorite new bit of nature when I moved to North Carolina – they were resilient in the intense thunderstorms, and the leaves felt like leather and looked to me like little boats. The bottles that are in the photogravure series were actually part of an installation in my first apartment, and then later, after moving several times, became the subject in the “Stories from the Sea” series. The obsession with circular motifs began at this time; they are portals into stories, memories, places, dreams.”

According to Schorr, the “Stories from the Trail” series – the palladium prints and the cyanotype over inkjet prints – is her most recent work and is inspired by her love of trail running.

“I run long distances on the trails, and at some point, when I am out in the woods, I become completely lost in thought and very in tune with my senses and nature,” Schorr said. “The feathers in the large cyanotypes are all of the incredible feathers I have found on these trails.”

Although she was creative and had always appreciated nature, Schorr said she never thought she wanted to become an artist or teacher.

“I actually always wanted to be a dolphin trainer,” Schorr said. “I found photography through my father when I was 14, and then discovered the darkroom in high school, and skipped lots of other classes to work in the darkroom. I initially went to college for marine biology and journalism, but it left me craving more creativity, so I switched my major to visual arts. My mom about had a heart attack when she found out. What would I possibly do with that major? I made a lot of work, all black and white medium format and large format film. I started working as a wedding photographer assistant and gave up; it was too competitive. I went to graduate school for art education because I thought that would be a wonderful way to share my passion for art and still make a living.”

Schorr currently works part-time as the education director at The Light Factory, a non-profit center for photography in Charlotte, and teaches photography at various locations. She earned a B.A. in visual arts and art history from Roger Williams University and an M.A. in art and art education from Columbia University, Teachers College.

Schorr said that some of her work is too personal to share, but that she is motivated to share it because of how it could affect people.

“I want to share these pieces, and I hope that others are inspired or want to learn how they are made,” Schorr said. “I am hesitant to share my self-portrait work, and so I have pieces that I have made simply for me, because it is therapeutic in a way, and sometimes the work has to be made. But it does not always have to be shown. Being an artist is so vulnerable – that work is me out there in front of everyone.”

According to Schorr, what she is working on now involves the memories and memorabilia of the times she spent fishing with her dad.

“I am making lots of cyanotypes of my father’s saltwater fishing lures and my fishing lures I use for trout and bass, as well as my old ones I used when I was a kid,” Schurr said. “I love these; they are playful and still nostalgic. It is hard to find some of the old lures my father has hidden in all his tackle boxes. I think this is kind of the ‘Stories from the Tackle Box’ series: each lure has caught its own memory of that one big fish.”