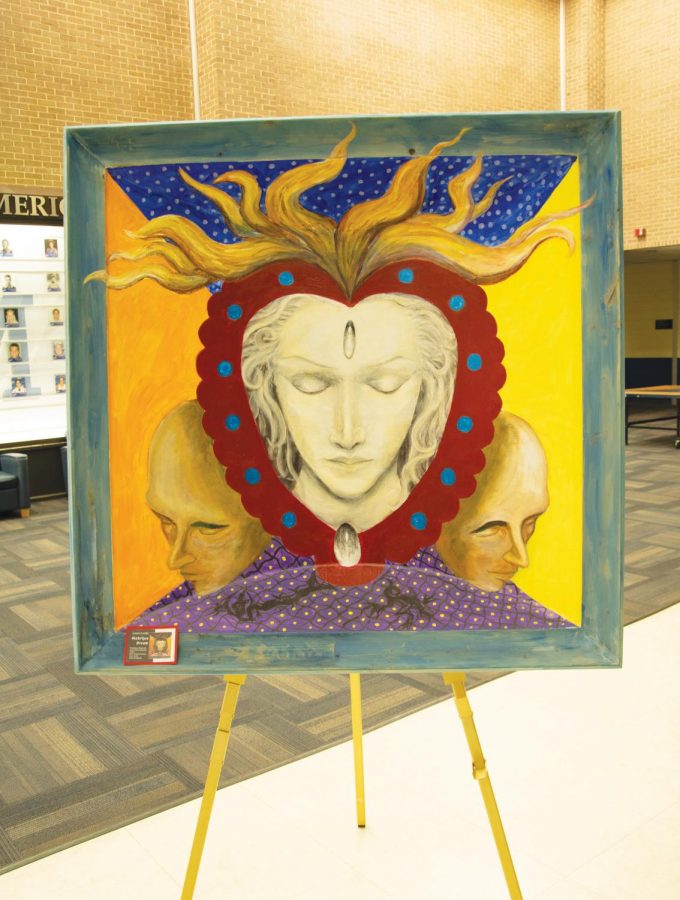 Laura Lesllo's art on display in the UC commons.

FMU student life hosted a Hispanic Heritage program on Sept. 23 from 1-4 p.m. in the Smith University Center (UC) commons and from 4-6 p.m. in the Chapman Auditorium in the Robert E. McNair Science Building to promote Hispanic heritage month.

Hispanic Heritage month runs from Sept. 15–Oct. 15 and serves as a celebration of the contributions that Hispanic Americans have had on the culture, history and heritage of the US.

In the UC, Laura Lesllo, a native of Mexico City, displayed various pieces of her artwork. Students were able to view the pieces and talk to the artist.

Lesllo said that working as an artist in the US is a lot more expensive than in Mexico. One of the most expensive parts is paying for new materials to experiment with.

Lesllo recently moved to the US and now resides in Greenville, SC. Her artwork reflects on Hispanic cultures and often depicts a religious representation of fights between an eagle and a snake.

In this exhibition, Lesllo presented pieces that represent her fears of the sea and her love of using birds in her work. While she is a good swimmer, she has always had a fear of being in the sea, so she decided to create work that showed her fear and how to overcome it.

“Being human is part of overcoming your fears of darkness and the light,” Lesllo said. “Fears come from your uncontrollable insecurities.”

In Chapman, Adalia Ellis, part-time instructor of mass communication and owner and founder of Aroha Arts Collective, gave a demonstration on Afro-Latin dance and culture around the world. She also invited students to come on stage and try the various forms of dance.

“I think it’s really, really important to understand (Afro-Latin dance),” Ellis said. “There are roots to all of these dances.”

Ellis introduced each various form of dance and demonstrated it with an instructor from her dance studio. After dancing, she showed a video on the roots and culture behind the dances.

After the demonstration, students were encouraged to come on stage to participate in a class where they were taught the basic steps to each of the dances.

Next semester Ellis will be offering a course on the history of Afro-Latin dance and music. Students who are interested are encouraged to sign up for the course.