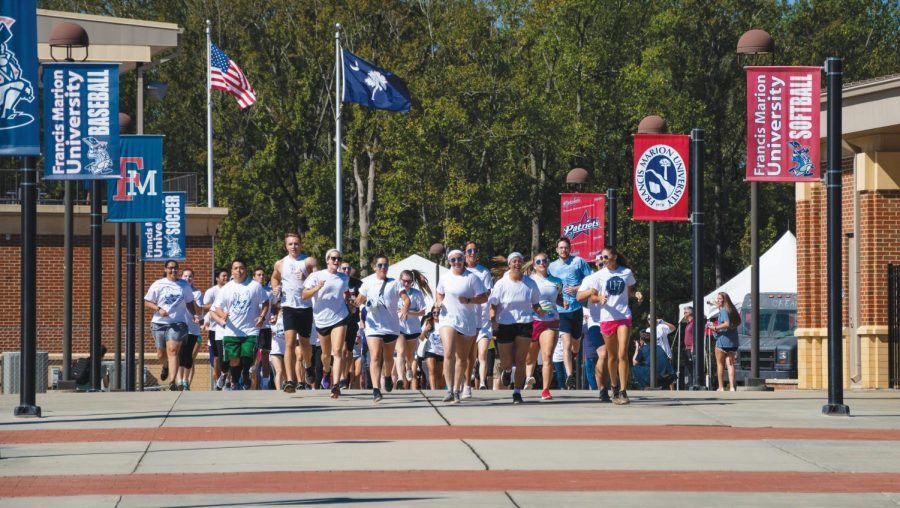 Student Life and FMU’s Campus Activities Board (CAB) hosted a Color Run on Oct. 12 at 12 p.m. at the Griffin Athletic Complex.

The event had a large turnout with over 100 students, faculty and other members of the Florence community in attendance.

The run started at the entrance of the Griffin Athletic Complex and continued around the entire complex.

As the participants ran or walked, volunteers were set up at tents to throw powdered paint at them.

Student Life and other FMU organizations, like the CAB, hosted the color run to get students out of their dorms and more involved on campus.

“We did it purely just for fun,” Alex McGill, student life specialist, said.

The run was not timed or competitive so that it could be inclusive for anyone who wanted to join.

“We wanted to make sure that people of different athletic abilities and mobilities could be involved,” McGill said.

Even though the event was not associated with mental health, that was one of its goals.

“It kind of dealt with mental health because it pulled people out of their dorms and gave them a reason to come out and enjoy a nice sunny day,” McGill said.

Brianna Carter, a member of Kappa Delta Sorority, came out with her sorority sisters to enjoy the run.

“My favorite part about today’s color run was being able to see everyone and take a lot of pictures,” Carter said.

There were a lot of professors who came out to enjoy the run.

Tamatha Barbeau, biology professor and advisor for the Pre-Vet club, said she loved running and joined the mix of students, locals and other professors.

“Before today, I had never participated in a color run, so when I saw that there was one right here on campus, I knew I had to do it,” Barbeau said.

During the color run, Barbeau had an experience that she will always remember.

“While I was running through one of the color stations, I decided to throw my hands in the air and yell out and when I did all of the color powder got in my mouth,” Barbeau said. “So, the rest of the run was me running and spitting out powder.”

As a professor, Barbeau said the color run was a great opportunity for students to relax and build a sense of community with their peers and their teachers.

“We are past midterms and everyone is frazzled and events like these help de-stress them,” Barbeau said.

Student Life likes to host big events on campus to make it easier for students to attend and explore their campus.

After the participants finished their run/walk they were able to enjoy different foods and festivities to cool down at Oktoberfest.

FMU music students and faculty were able to showcase their talents and perform at the festival. There were vendors for funnel cakes, beers, ice cream and even burgers and hotdogs.