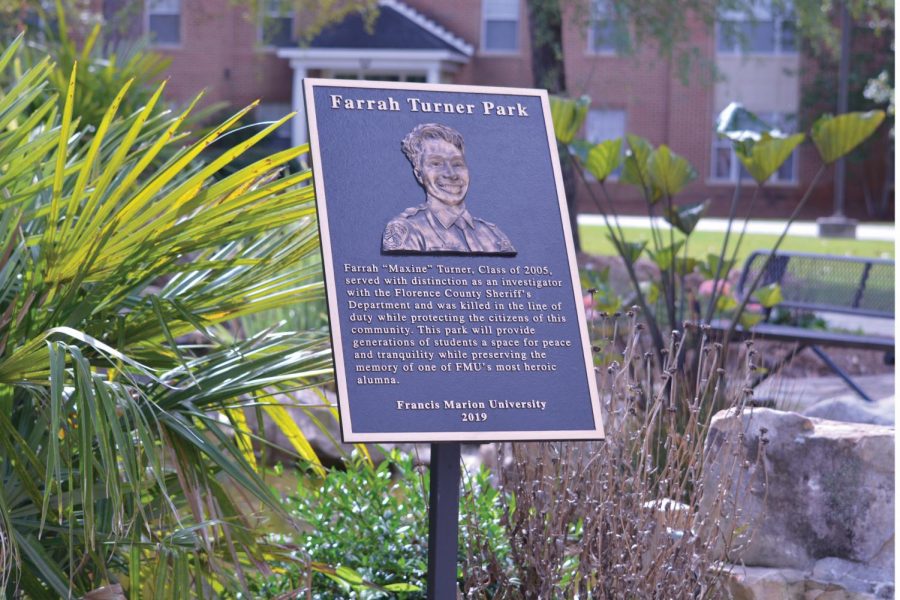 Farah Turner park was established in 2019 in honor of fallen officer Farah Turner, Class of 2005.

FMU and the Florence community gathered on Oct. 3 at 6 p.m. at the Performing Arts Center in downtown Florence in remembrance of the Vintage Place ambush where seven police officers were shot, two of whom died from their injuries.

One year ago, on Oct. 3, 2018, Florence county law enforcement was called to a house in the Vintage Point subdivision off of Hoffmeyer Road after Frederick Hopkins shot at deputies investigating the alleged sexual assault of a foster child by a 27-year-old male at the house.

After responding to the call, seven officers were shot; among them was Florence police Sgt. Terrence Carraway, who died that day, and Florence County sheriff’s investigator Farrah Turner, an FMU alumna who succumbed to her injuries a few days later.

The remembrance ceremony began with the posting of colors by the S.C. Highway Patrol Honor Guard, and the singing of the national anthem by  Solicitor Ed Clements. This was followed by the opening remarks by Clements.

“Heroism, bravery, courage,” Clements said. “Those are the highest virtues known to man, and they were virtues that were certainly exhibited one year ago today by many of our officers and first responders; particularly the ones who were wounded and the ones who had fallen: Terrance Carraway and Farrah Turner.”

Clements continued by saying officers face adversity and put their lives on the line every day, and that heroism isn’t what happens when you are at the right place at the right time.

“They were courageous and they were brave,” Clements said. “They faced it every day. The question that I ask myself about that virtue is, ‘What is it?’ Is it when an ordinary person faces a circumstance and they do something extraordinary? Or is it people who do extraordinary all the time?”

Clements said because of the heroism shown last year by officers on duty, Oct. 3 would be known as “Hero Day” in Florence. It will serve as a way to celebrate all of the unsung heroes who put their lives on the line each day.

S.C. Gov. Henry McMaster then spoke as the keynote speaker. He said that while this is a solemn remembrance of the shooting, it will also serve as a celebration of the heroism that was exhibited that day.

McMaster also said the tragedy brought the entire community and state together and made them stronger as a whole.

“This is like a family; a strong family,” McMaster said. “And I’m always interested in why we’re so strong. There must be 500 people in here, and we don’t all know each other by name, but we all know each other because we are all products of this state and this great place called South Carolina.”

McMaster continued by saying that there is more patriotism in S.C. per square inch than any other place in the world.

“Patriots,” McMaster said. “They are willing to stand up and fight, for themselves and their fellow man. They fight for people who they don’t even know their names.”

According to McMaster, everything that South Carolinians have gone through has made them strong people.

“It takes a strong man or woman to put his or her life on the line for their fellow man,” McMaster said. “Each morning I put on a tie. They put on a bulletproof vest, sometimes two; because one bulletproof vest won’t stop a rifle shot, it takes two. They’ll get up in the middle of the night and pull a car over when they don’t know who’s in it, or where they’re going, or where they’re from; they put their lives on the line for us.”

McMaster finished by saying that the strongest people in S.C. are those who wear a uniform and put their lives on the line every day. He said without them, S.C. would not be the place that it is today.

“The men and women in uniform, all kinds, whether it’s military, firefighters, police or first responders of all kinds, those are patriots,” McMaster said.

The ceremony closed with special remarks from Rev. Waymon Mumford who also led the audience in a candlelight vigil.