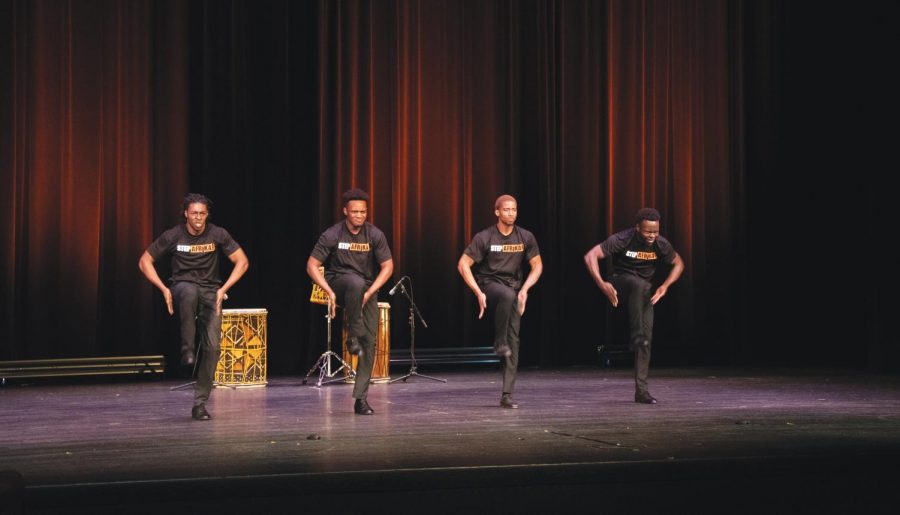 Step Afrika wows the crowd with their performance.

FMU students and the surrounding community were amazed by the organized step routines from the Step Afrika Dance Company at their performance on Oct. 10 at 7:30 p.m. at the FMU Performing Arts Center.

The performance was organized by the Campus Activities Board, and people from all over Florence came out to enjoy the show, which started off with a grand entrance and a step routine from the seven dancers.

After their first step routine, the dancers introduced themselves to the audience and told the students to feel free to make noise and let them know when they do something they enjoy.

The dancers also gave the audience a chance to get up and experience stepping for themselves. They called people up from the crowd to participate despite their age.

After audience members made their way to the stage, the dancers taught them a step routine and let them perform it for the rest of the audience.

Although the performance was geared toward dancing and stepping, they also included a thorough history of African culture and some traditional African dances.

One of the African dances they performed originated from the Zulu culture. The host told the audience how the Zulu expressed their culture through dance.

The Step Afrika performers not only danced but sang and played instruments as well.

Taquez Whitted, one of the senior dancers who has been with the company for a few years, was one of the outstanding performers in the show.

“Stepping is a community-based art form,” Whitted said. “We really like for the audience to be a part of the show.”

Even though Step Afrika puts on the show for the enjoyment and enrichment of the audience, they also are able to enjoy the show themselves.

“Our favorite part, which is most of the time the same as the audience, is the Zulu dance,” Whitted said. “It’s always fun to do when the audience is just as hyped as we are in the dance.”

Although stepping is an American-based art form, there are a lot of similarities to the African culture.

The dancers performed a traditional African dance called the gumboot dance. The gumboot dance was a dance that was used as a way for Africans who spoke different languages to communicate when they went to work at one of the coal mining factories in South Africa.

“The Gumboot dance has the most similarities to the American art form of a step,” Whitted said.

The show was an overall success for both the audience and the dancers.

“We enjoy touching the lives of so many people by sharing the art of stepping and educating them at the same time,” Whitted said.