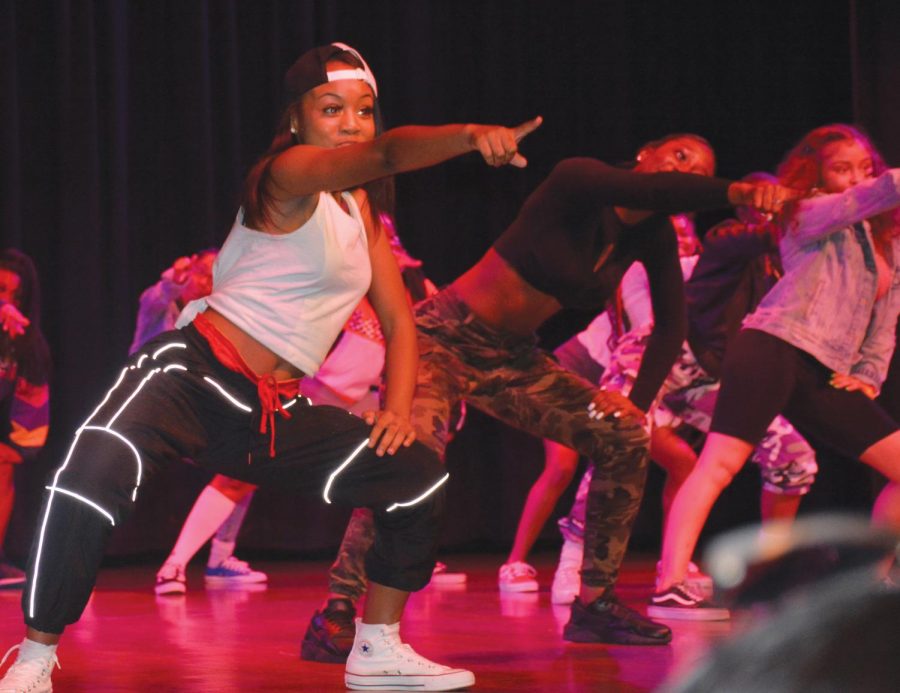 The Royal Dancing Dolls perform and invigorate the crowd at FMU's Got Talent.

Students packed the auditorium hoping to find the best seats. There were so many students that some of them had to sit on the steps and in the middle of the isle.

CAB vice chair Caira Wilson and board member Matthew Mendelssohn kept the crowd laughing between acts as the hosts of the night.

There were 20 acts of the night, with three different judges from different departments. The judges were associate professor of English Rebecca Flannagan, admissions counselor Kadarius Seegers and residence life coordinator Lenton Holley.

The contestants stood backstage eagerly putting the final touches to their costumes and performances.

“That was my favorite part of the show,” Wilson said. “Being able to see the performers prepare and overcome their nervousness was really empowering.”

All of the contestants were creative and talented. The acts ranged from dancing, rapping and singing to stand-up comedy.

The Royal Dancing Dolls team got the crowd cheering and dancing in their seats to their old-school hip-hop dance performance.

Freshman mechanical engineering student Malcolm Armstrong stole the show with his amazing performance of his own song “High Hopes.”

Armstrong was given the Golden Buzzer for the best performance of the night. The talent show was his first time performing in front of a large crowd.

Armstrong started out writing down all his thoughts and then one day he decided to put them to music.

“I listened to music all the time so I figured I could turn my thoughts into music,” Armstrong said.

Armstrong wanted his music to be authentic and realistic to his life experiences, so when the music track messed up near the end of his rap, he started freestyling.

I was able to freestyle because my music was real and I was talking about real things in my life,” Armstrong said.

Woodard started off writing songs and poetry as a way to connect with her father who was not always home.

“Performing my poetry is an outlet for me,” Woodard said. “I get to connect with people through my words and also build my own confidence at the same time.”

FMU’s Got Talent will return on Nov. 13 at 7 p.m. in the Chapman Auditorium.